Canadian speedskater Gilmore Junio ceded his Winter Olympic spot to teammate Denny Morrison in the men’s 1,000-meter race, an act of kindness that ended with Morrison winning a silver medal in the event.

Morrison failed to qualify for the Olympic roster after falling during trials. That’s when 23-year-old rookie Junio decided to offer Morrison, the more experienced skater, his place in the 1,000-meter competition.

Junio said his veteran counterpart was better suited for this year’s race, calling his sacrifice a “no-brainer.”

“People talk about it as being a huge sacrifice, but I don’t see it that way,” Junio said, via The Canadian Press. “It was such an easy decision. It was such a simple decision for me. It was about giving Canada a chance to win a medal.”

Junio’s selfless gesture paid off. Morrison claimed a silver medal, finishing just four one-hundredths of a second behind gold medalist Stefan Groothuis of the Netherlands. He went on to win a second speedskating medal for Canada when he took bronze in the 1,500-meter event.

“I’ve just found motivation and wanted to do another Olympics because of what’s happened between Gilmore and I,” Morrison said at a Sunday press conference. “That’s almost inspired me to want to continue to train so I can continue to pass on whatever knowledge I have to the other athletes as well as Gilmore.”

While Morrison and Gilmore have shown great camaraderie throughout the 2014 Olympics, they are now clashing over which athlete should carry the Canadian flag at the Olympic Closing Ceremony.

Both skaters argue that the other should carry the flag, but fans on social media seem to favor Morrison’s movement to bestow his flag-bearing duties upon Junio. As of Monday morning, more than 4,000 people have liked a Facebook page entitled “Gilmore Junio for Canadian Olympic flag bearer,” and Morrison himself launched a #ThankYouGilmore Twitter trend.

?I feel like getting my medal and cutting it in half, because (Junio) deserves it,? Morrison said, via the New York Daily News. 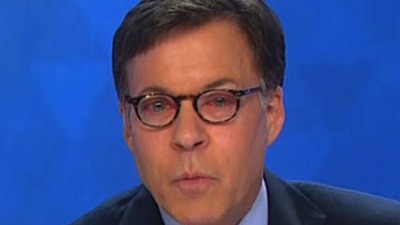 Bob Costas On Monday Return: ‘I’m Not 100 Percent, That’s For Sure’