LeBron James Flops Twice In One Play, Gets Called For Foul (GIF) - NESN.com Skip to content

This, LeBron James, is why the majority of the nation cannot bring itself to root for you.

James is undoubtedly the best basketball player on the planet, and probably will be for some time, but he has a reputation for theatrical embellishment that would make even a Montreal Canadien cringe.

That was on full display Monday night against the Detroit Pistons, when King James flopped not once, but twice in one play while battling for position with Detroit’s Greg Malone. A look at the replay shows that Malone did make contact with James’ chin, but not nearly hard enough to send the MVP collapsing into a heap on the court.

The officials apparently agreed, as James was the one called for a foul on the play. The Miami Heat went on to win 102-96, though, their fifth victory in the last six games.

Check out LeBron’s flop-a-palooza in GIF form below, courtesy of @corkgaines. 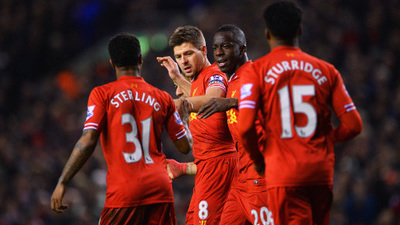 Liverpool To Return To U.S. In Summer 2014 For Guinness International Champions Cup