Miami Marlins Among Five MLB Teams That Could Surprise Everyone In 2014 - NESN.com Skip to content

It’s a new year, which means a new beginning for those Major League Baseball teams that stunk up the joint in 2013.

There were plenty of crappy teams last season, and if we’re going to look at things realistically, many of those teams will once again suck in 2014. But some other squads that finished below .500 last season could enjoy better days sooner rather than later.

The Los Angeles Angels and Toronto Blue Jays entered 2013 with sky-high expectations before realizing that offseason noise doesn’t always lead to success on the diamond. Both are candidates to rebound in 2014 because of the talent still on their rosters, but let’s just see how things play out in regards to those two underachieving clubs. Instead, let’s focus on some legitimate dark horse teams.

The following squads might not contend for a division title — or even a playoff spot — in 2014, but each team could drastically improve upon its poor 2013 season.

The Miami Marlins were terrible in 2013, and they probably are a few years away from becoming legitimate contenders in the National League East, especially with the Atlanta Braves and Washington Nationals currently cemented at the top of the division. But the Fish could be an exciting team to watch in 2014, considering the club features a ton of young players who will be given opportunities to make names for themselves.

Giancarlo Stanton and Jose Fernandez obviously are the two standouts on the Marlins’ roster. Stanton figures to anchor Miami’s lineup, while Fernandez, the reigning National League Rookie of the Year, should be an ace atop the rotation for many years. Those are two exceptional building blocks, assuming the Marlins make good on their commitment not to trade Stanton.

The Marlins’ lineup also features 22-year-old Christian Yelich, who played well last season after a midseason call-up. Yelich hit .280 with four homers, 16 RBIs, 10 stolen bases and a .370 on-base percentage in 62 major league games, giving the Marlins even more of a reason to be optimistic about his future.

It’ll be interesting to see how 24-year-old shortstop Adeiny Hechavarria and 23-year-old center fielder Marcell Ozuna progress offensively in 2014. However, the Marlins should be strong defensively up the middle if both of those players are deployed on an everyday basis.

The rotation, headlined by Fernandez, ultimately could be the club’s biggest bright spot. Henderson Alvarez, Jacob Turner and Nathan Eovaldi — in addition to Fernandez — each had an ERA under 4.00 last season, and they could comprise a formidable unit with continued development.

The Marlins also added a few veterans — Jarrod Saltalamacchia, Garrett Jones, Casey McGahee and Rafael Furcal — at reasonable prices while cutting ties with other veterans who simply weren’t getting it done.

The New York Mets already were dealt a blow for 2014 when Matt Harvey went down with an injury that required Tommy John surgery. It’s unlikely that the promising young ace will return in 2014, meaning the Mets will need to look elsewhere for a rotation stalwart.

The Mets signed Bartolo Colon in the hopes that he’ll help stabilize the rotation in Harvey’s absence. But the club’s internal options — not the big 40-year-old — offer real reasons to be optimistic about New York’s 2014 outlook.

Dillon Gee endured some early struggles last season, but the 27-year-old posted a 2.71 ERA over his final 22 starts. Toss in Zack Wheeler — MLB.com’s No. 8 prospect before last season — and the Mets might be able to withstand the loss of Harvey, even if the rotation won’t be as dynamic.

The Mets also could see improvements offensively if David Wright remains healthy and Ike Davis puts his awful 2013 season in the rearview mirror. Curtis Granderson and Chris Young should add some pop, while the Mets’ hope is that Travis d’Arnaud lives up to his potential behind the plate.

The Mets, like the Marlins, might have a hard time contending in the NL East because of the Braves and Nationals being so talented. New York shouldn’t immediately be written off, though, as improvement seems inevitable.

The Colorado Rockies are a difficult team to gauge year to year. But while it won’t be easy succeeding in the National League West this season, the Rox have the potential to be a surprise team.

The Rockies are built to thrive defensively, in both the infield and outfield. In fact, the left side of the Rockies’ infield, with shortstop Troy Tulowitzki and third baseman Nolan Arenado, is among the game’s best. The question will be if the rotation can keep opposing teams in the yard.

Brett Anderson joins a rotation that already includes Jhoulys Chacin, Jorge De La Rosa, Juan Nicasio and Tyler Chatwood. While the club lacks a legitimate ace with Ubaldo Jimenez long gone, the unit could be respectable enough for the team to succeed if everything else goes Colorado’s way. In addition to superb defense, the Rockies’ lineup, which features Carlos Gonzalez, Michael Cuddyer and Justin Morneau, should be potent.

The NL West should be more competitive in 2014, even if the Los Angeles Dodgers are the clear-cut favorites to repeat as division champs. The San Diego Padres’ potential emergence is a big reason why.

The Padres made a low-risk, high-reward move this offseason by bringing in Josh Johnson. If Johnson can recapture some of what made him an ace with the Marlins, the Padres’ starting rotation could be a solid unit in 2014. Rather than relying on random journeymen, the Friars’ staff includes veterans like Ian Kennedy and Eric Stults, as well as promising, young hurlers Andrew Cashner and Tyson Ross, among others.

The biggest question might be if San Diego can produce enough offense, especially in pitcher-friendly Petco Park. But if Chase Headley makes it happen in a contract year, and other regulars — like Everth Cabrera, Carlos Quentin and Yasmani Grandal — stay on the field, it shouldn’t be an issue.

Keep in mind that the Padres, who were plagued by injuries last season, were over .500 in the second half.

The White Sox would have been much more intriguing if they landed Masahiro Tanaka, as Chicago still has some question marks in its starting rotation. But it’s hard to overlook some offensive developments that could make the South Siders relevant in the American League Central.

Jose Dariel Abreu was signed to big money, Adam Eaton was acquired from the Arizona Diamondbacks, and Avisail Garcia is a prime breakout candidate in his first full major league season with the White Sox.

If the White Sox can get production from starting pitchers beyond Chris Sale — most notably, up-and-comer Erik Johnson — and have Nate Jones transition seamlessly into the closer’s role, Chicago might not be too terrible. 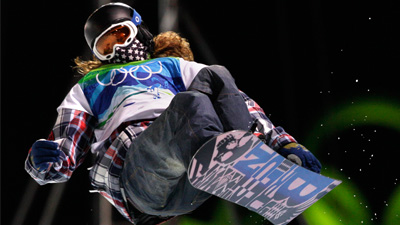 Canadian Snowboarders Bash Shaun White For Backing Out Of Event