Mays, considered by many to be the greatest all-around player in baseball history, didn’t make the final cut for NESN.com’s MLB Mount Rushmore. That’s because, after hours of agony, there were four others — Babe Ruth, Ted Williams, Hank Aaron and Jackie Robinson — whose overall credentials were difficult to ignore.

Mount Rushmore, as a NESN.com colleague put it, is all about significance rather than greatness. Each of the four players included on NESN.com’s MLB Mount Rushmore transcended the game while not being too shabby at his craft, either.

Babe Ruth, the greatest slugger of all time, is almost like a mythical creature in that certain stories circulating about The Bambino seem incomprehensible. Ruth was a larger-than-life figure during the 1920s, and he still, in many ways, represents what baseball is all about for many Americans.

Ruth, who paved the way for America’s infatuation with the long ball, stands as a symbol of simpler times. Before there were strict athlete workout regimens or performance-enhancing drug suspicions, there was Ruth — an out-of-shape bopper you’d expect to see down a beer and gobble a hot dog before jacking a mammoth home run out of the yard. The term “Ruthian” has become synonymous with words like “colossal” and “powerful.”

Ruth thrived as both a slugger and a pitcher — something baseball fans won’t be seeing anytime soon. There might not be a more unique athlete in all of sports.

Teddy Ballgame is the greatest pure hitter who ever lived. He ate, slept and breathed hitting during his baseball career, which would have been even more impressive statistically if Williams didn’t miss significant time in his prime while serving as a naval aviator in World War II and the Korean War.

Williams, a career .344 hitter, is the last player to hit .400 in a season (.406 in 1941). The Splendid Splinter is a 19-time All-Star, a six-time American League batting champion and a member of Major League Baseball’s All-Time Team. But he’s also an American war hero who courageously fought for his country amid his promising career on the diamond. That counts for something.

The debate between Hank Aaron and Willie Mays is almost too close to call, as each player was great in so many ways. But Aaron deserves the nod because he not only is seen by many baseball historians as the real home run king, but he also endured tremendous hardship in his quest to break Babe Ruth’s longstanding record.

Aaron received death threats before the 1974 season, as there were some people back then who didn’t approve of a black man breaking an incredible, historic record held by a beloved white man. Sure, there were supporters, too, but Aaron himself admitted that his biggest fear following the 1973 season — which ended with him one homer shy of Ruth’s record — was that he wouldn’t be alive for the 1974 season.

Jackie Robinson was a great ballplayer. His six All-Star selections, two stolen-base crowns and 1949 National League MVP award are proof of that. But Robinson, of course, will always be known as the first black MLB player in the modern era.

Robinson broke the color barrier in 1947. Black players had been relegated to the Negro Leagues for six decades before Branch Rickey and the Brooklyn Dodgers gave Robinson a chance. Robinson’s accomplishment initially was met with skepticism from some, but it changed the game forever. Robinson became an inspirational figure within the Civil Rights movement.

Robinson’s No. 42 is retired by every team in Major League Baseball. Not including him on the MLB Mount Rushmore would be difficult to justify. 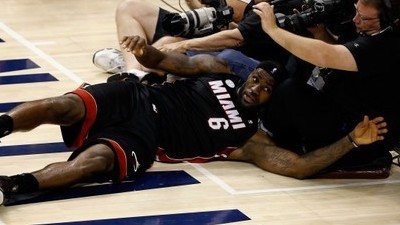