Rather than ban home plate collisions outright, Major League Baseball and its players adopted a rule limiting them this season.

In what both sides said was a one-year experiment, the rule allows collisions if the catcher has the ball and is blocking the runner’s direct path to home plate, and if the catcher goes into the basepath to field a throw to the plate.

“It’s good, I think it takes away the malicious intent behind the play at the plate,” Texas Rangers catcher J.P. Arencibia said. “Obviously the runner doesn’t always have to slide, and the catcher still has the ability to block the plate once he has the ball in hand.”

Along with the rule, the sides agreed to a pair of comments umpires use to interpret the rule. The first comment says “the failure by the runner to make an effort to touch the plate, the runner’s lowering of the shoulder, or the runner’s pushing through with his hands, elbows or arms, would support a determination that the runner deviated from the pathway in order to initiate contact with the catcher in violation.” The comment says players who slide appropriately are not in violation of the rule.The new rule, 7.13, states “a runner attempting to score may not deviate from his direct pathway to the plate in order to initiate contact with the catcher (or other player covering home plate).” A runner violating the rule shall be declared out, even if the fielder drops the ball.

“There are some things that often times can make the water a little muddy,” union head Tony Clark said after meeting with the New York Yankees. “Over the course of the offseason, the concern was protecting players, but trying to draw up something that not only made sense on paper, but also was going to make sense to the players that were playing on the field.”

The umpire crew chief can use the new video-review system to determine whether the rule was violated.

“It stops guys just going out of their way just to try to dislodge the baseball when they (catchers) have the plate,” Texas Rangers manager Ron Washington said.

Debate over plate collisions has intensified since May 2011, when San Francisco’s Buster Posey was injured as the Marlins’ Scott Cousins crashed into him at the plate. Posey, an All-Star catcher, sustained a broken bone in his lower left leg and three torn ligaments in his ankle, an injury that ended his season.

In Game 5 of last year’s AL championship series, Detroit backstop Alex Avila was pulled a couple of innings after being run over at the plate by Boston’s David Ross, a fellow catcher.

“I think it’s fair. A runner’s path is to home plate,” Oakland catcher Derek Norris said. “Any deviation and he’s not trying to score, he’s trying to harm. A runner going out of the basepath trying to break up a double play is declared out. This is the same concept as a double-play slide.” 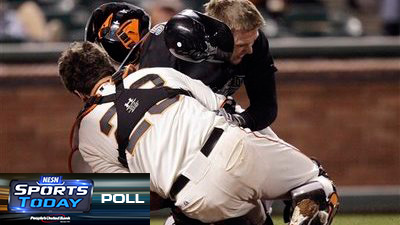 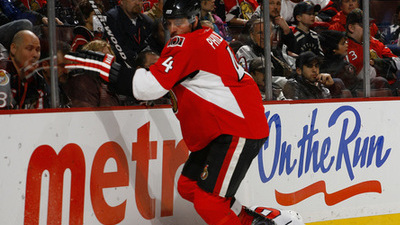