Final, East wins 163-155: It sounds really weird to say this in an All-Star exhibition, but one side clearly played with more pride.

After three listless quarters by both sides, the East woke up in the fourth quarter and overtook a West squad that should have dominated — and looked like it would from the start. The West sprinted out to an 18-point lead while Kevin Durant and Blake Griffin each reached 20 points by halftime. But Kyrie Irving wasn’t having that.

Irving blew up in the second half, tallying 24 and seven of his 31 points and 14 rebounds after the break. Carmelo Anthony stretched the floor by draining eight 3-pointers en route to 30 points, while Durant and Griffin each finished with 38 points. Irving, who hasn’t had a very strong season, claims the game’s Most Valuable Player award in the highest-scoring All-Star game in NBA history.

Now let’s get back to games that matter.

Fourth quarter, 1:01, East 159-155: Anthony and Irving may have just clinched the All-Star game victory for the East. Anthony knocked down the shot, his eighth 3-pointer of the game, but Irving was the one who came up with the offensive board after James missed a straight-on three earlier on the same possession.

Fourth quarter, 2:41, West 152-150: If Curry can figure out what’s wrong with his shot, the West could close this thing out quickly. He finally buried a trey, but was swiftly yanked from the game for James Harden, so things could stay interesting to the end.

Meanwhile, James and Noah are showing that they could lay waste to the NBA as a pick and roll combo if they ever got on the same team in a game that mattered. Even with Irving in the game and mostly dominating, James has played point guard in pick and rolls with Noah and gotten the Bulls big man three layups.

Griffin is stalking an All-Star record with 38 points, which puts him in line for the MVP if the East wins, even though the best two players in the game have been Irving and James for the East.

Fourth quarter, 5:23, West 145-142: It’s getting serious and even a little chippy out there. This is the main reason the NBA All-Star game is still worth watching year after year — because every once in a while, it turns into a real game at the end. Most of the all-star events in the four major sports can’t say that.

While Irving makes a bid for MVP, John Wall and the East subs have brought their squad all the way back. Joakim Noah is out there actually playing defense and East coach Frank Vogel has Roy Hibbert, James and George to bring off the bench to shut down the West on defense.

Dwyane Wade and the East closed the third quarter on an 18-3 run, with Wade, who was questionable to play in this game due to his sore knee, breaking into double figures with 10 points. With Durant and Griffin on the bench, the ballyhooed West bench — which we ballyhooed early tonight — surrendered most of an 18-point lead. Irving was huge with nine points and three assists in the third quarter alone.

If you’ve only slightly been paying attention until now, wake up. We could be in for an entertaining final 12 minutes.

Durant and Griffin are already at 30 points, while Anthony is flirting with that mark as well. Irving is the first to crack a double-double with 14 points and 10 assists, although just about anyone could rack up double-digit assists if they had the ball in their hands enough.

It will take a push by the East on both ends — hey, stop laughing — to make this interesting in the fourth quarter. OK, maybe “interesting” is too strong a word. “Watchable,” maybe?

Halftime, West 89-76: Do not double-check that score. It’s correct.

These guys have set a new All-Star game record for total points in a half, exploding for 165 points on 57 percent shooting. The teams have combined for 50 assists on 74 field goals — and absolutely no defense.

That could change in the fourth quarter if the score remains somewhat manageable. In the meantime, Kevin Durant is cruising with 22 points on 9-for-14 shooting and Kyrie Irving has a game-high seven assists.

First guy to draw a charge wins my MVP vote.

Second quarter, 1:39, West 81-71: Kevin Durant and the West are in the midst of an extended run, so it may be time for the East to call a timeout to regroup. Or not. I don’t know. I have no idea what the strategy protocol is for All-Star games.

Durant is now up to 17 points, coming in as the third-leading scorer in this game behind Anthony and Griffin, with 20 apiece. Things are getting pretty fancy, perhaps a little too fancy. James took about eight steps before blowing a left-handed layup, and James Harden was unprepared for a lob pass from Durant on the break.

Second quarter, 7:37, game tied 56-56: Bill Russell was left off James’ Mt. Rushmore, but that’s OK with Russell. As the 11-time champion noted basketball is a team game — and nobody accomplished more in a team sport than Russell. William Felton got serenaded with “Happy Birthday to You” four days after he turned 80 years old.

Both teams have emptied their benches, tossing first-time All-Stars like Paul Millsap and DeMar DeRozan onto the court. The West is so much deeper, as the team’s respective reserve units are making clear. The West’s second unit consists of Chris Paul, Dirk Nowitzki, LaMarcus Aldridge, Damian Lillard and Dwight Howard. Yikes.

The East’s bench mob is DeRozan, Millsap, Joe Johnson, Joakim Noah and John Wall. That’s a quality fivesome, but it pales in comparison to the two Hall-of-Famers and MVP candidate for the West.

End of first quarter, West 44-42: The first quarter was a defense-free zone, as usual, but the highlight of the game so far is a missed shot. Defense has nothing to do with it, however.

LeBron James muffed an alley-oop toss from Paul George in laughable fashion, trying to grab the ball with one hand and throwing it entirely over the hoop and banging his arm on the backboard. The miscue didn’t prevent James from getting into double figures in scoring without even really trying.

Griffin’s still running away as the high scorer, ending the first frame 9-for-11 from the field for 18 points. Pacers center Roy Hibbert has four points on a pair of 18-foot jumpers, showing just how crazy this whole thing is.

First quarter, 4:03, East 30-27: So far, the best part of the game is how every player is determined to touch the ball after it goes through the hoop, daring the officials to call a delay-of-game.

The worst part is the uniforms.

There’s nothing anyone can do about the unis now, but it’s hilarious watching these guys thumb their noses at the new rule that penalizes the offensive team for touching the ball after it goes through the hoop. They’ve touched it almost literally every time, including after all four Blake Griffin dunks.

Griffin’s leading the charge with 14 points, while Carmelo Anthony has 10 points for the East. Get your abacus out, because there will be plenty of scoring and you’ll need every tool you can find to add up the points.

It’s always nice to see the hometown star get the game’s Most Valuable Player award, but it will be a tall order for Anthony Davis to pull that off tonight. Davis, a second-year stud at power forward, is making his first All-Star game appearance. It’s rare for a first-timer, never mind a guy coming off the bench, to secure MVP status. Davis wasn’t even on the initial roster, having been chosen as an injury replacement for Kobe Bryant.

That said, Davis isn’t unworthy. It would be quite the story to go from All-Star snub to MVP.

10 a.m. ET: The first NBA All-Star Weekend of Adam Silver’s tenure as commissioner has been shaky so far. The total mess that was the dunk contest still has a foul taste in the mouths of anybody who watched it.

Let’s see if the actual showcase event of the weekend can do any better.

LeBron James, Kevin Durant, Blake Griffin and the rest of the NBA’s best will suit up in some terrible short-sleeved jerseys for the NBA All-Star game on Sunday night. There won’t be much defense played, and the crowd will ooh and aah at alley-oops that were so telegraphed, they should travel via Western Union. It’s all in good fun, though, and if the score is halfway close in the final six minutes, it might actually turn into a real game.

Join us for some random thoughts from the game, which is scheduled to tip off at 8 p.m. 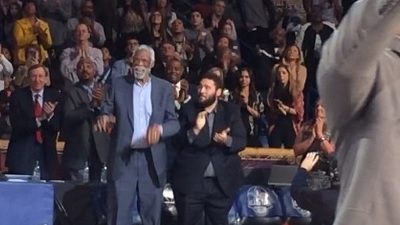