Rashid Williams has put his life on hold to try to fulfill his dream of playing in the NFL.

Williams lives in a minivan as he trains at TEST Parisi Football Academy in Martinsville, N.J., for the 2014 NFL draft. Williams told Yahoo! Sports’ Shutdown Corner he emptied his life savings to pay for the course and survives on peanut butter and jelly sandwiches and protein drinks. Williams sold his luxury sedan to buy the minivan so he wouldn’t have to pay for housing.

The 26-year-old Williams hasn’t played organized football since high school and quit his job as a sales representative at Frito-Lay to pursue the NFL after he tried out for a couple of indoor football teams. Williams ran track at Division II Holy Family in Philadelphia. He had enrolled at Penn State to get his MBA before he got the pro football itch.

It’s been a cold New Jersey winter, so Williams sleeps under three blankets while wearing layers of sweatpants and sweatshirts. During the day, he camps out at Panera Bread and libraries to keep warm.

Williams is a long shot to make the pros, but a little publicity by living out of a van can’t hurt, right? 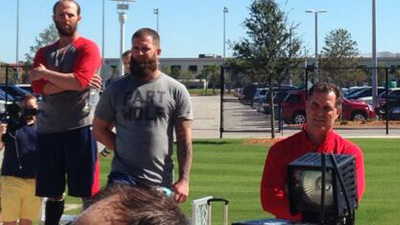