The NFL Scouting Combine is over, and the reports, workouts and injuries that came out of the yearly event shook up the 2014 draft rankings.

Jadeveon Clowney solidified his standing as the best athlete in the draft class with a 4.53-second 40-yard dash at 266 pounds, but there are serious concerns about his effort, which weren’t lessened when he chose to skip positional drills at the combine because of a stiff hip flexor.

The Houston Texans have no sure thing to pick No. 1 overall, since all of the top prospects have question marks.

Find out who the Patriots and other NFL teams could select in the 2014 draft in NESN.com’s post-combine mock draft.

He should be the No. 1 overall pick based on his athleticism and skill. Whether the Texans decide to select Clowney likely will be based on research into his character and work ethic. Clowney’s lack of effort has raised real question marks around the league.

The Rams are dedicated to quarterback Sam Bradford. If he’s going to succeed, he needs a dangerous receiver to target.

The Jaguars were content to play Luke Joeckel at right tackle before trading Eugene Monroe, and Robinson is a better prospect than Joeckel.

Daniel Jeremiah of NFL Network reports the Browns want to select Derek Carr with their second pick. I feel like Jimmy Haslam will want Johnny Football, though.

Mack proved he deserves to be a top five pick at the combine by excelling in speed, agility and explosion drills. The Raiders could use some help getting after the quarterback.

Lewan’s athletic display at the combine was enough to pass Jake Matthews, and the Falcons desperately need offensive line help. Lewan has character red flags that NFL teams have to sort out, however, and that includes a temper that could get him in trouble.

New Buccaneers head coach Lovie Smith doesn’t seem happy with last year’s rookie starter, Mike Glennon, under center. The Bucs could pull the trigger on the new face of the franchise at No. 7.

Jared Allen is likely on the way out, so the Vikings could use some help rushing the passer. Barr could be a situational rusher in his rookie season, then move into a starting role.

Matthews is too good to pass up at No. 9. Matthews and Cordy Glenn would make intimidating bookends to protect EJ Manuel. Matthews is a student of the game and has impressed teams with his smarts.

Speaking of intimidating bookends: Evans is slower than Calvin Johnson but equally gigantic. Quarterback Matthew Stafford could use another receiver to target.

Tennessee needs youth at defensive back. The Titans will really need secondary help if they let Alterraun Verner walk.

Ebron is not a typical Giants tight end, but Eli Manning could use another big receiver, which is essentially what Ebron is at 6-foot-4, 260 pounds.

Cortland Finnegan had a disappointing season in 2013. The Rams improved their offense with Watkins at No. 2. Now they can help their pass defense with Gilbert, who’s the most athletic cornerback in his draft class.

The Bears had trouble getting after the passer after Henry Melton went down with a knee injury. Donald could fix that problem in a hurry. He’s undersized, but there are few better athletes in this year’s draft.

As always, the Steelers desperately need help protecting Ben Roethlisberger. If Martin doesn’t work out at either tackle position, he could be a quality guard.

The Cowboys need to get much better on defense. Placing Mosley in the middle of the action would help.

The Ravens really missed Anquan Boldin in 2013. Lee could play that role well across the field from Torrey Smith.

The Jets are expected to cut Antonio Cromartie. If they do, New York will need another cornerback to pair with last year’s first-round pick, Dee Milliner.

This is purely a need pick. If Kouandijo’s arthritic knee doesn’t take him off the Dolphins’ draft board, he could really help Miami’s floundering offensive line.

Based on reports from the combine, NFL teams aren’t very high on Bridgewater. If he’s there for the Cardinals, though, they would have to jump. Bridgewater might be the smartest quarterback in the league, but teams are afraid of how well he’ll hold up with his frame.

Pryor is the best player on the board, and the Packers need help boosting their defense — especially in the secondary.

Shazier chose not to run at the combine but destroyed every other agility and explosion drill. Head coach Chip Kelly will like that athleticism.

Dwayne Bowe has worked out pretty well for the Chiefs. Why not pair another LSU receiver with Bowe?

Ealy is the type of defensive end the Bengals typically love. He ran a subpar 4.92-second 40-yard dash, but sometimes that doesn’t mean squat along the front seven.

Nix didn’t help himself out much at the combine, but big, athletic nose tackles don’t come around too often. The Chargers could use a massive presence like Nix in the middle of the defense.

Joe Haden is an elite talent at cornerback, but he can’t do the job alone. Fuller is a smart player who should rise on draft boards by May.

The Saints need help in a lot of areas, but finding a left tackle should be a top priority. Moses is Jeremiah’s No. 27-ranked player.

With Steve Smith getting up there in age, the Panthers could use another playmaking receiver. Cooks definitely fits that bill.

I was tempted to give the Patriots UNC defensive end Kareem Martin, since I think he climbs draft boards by May. I didn’t have the guts to do it, though. Seferian-Jenkins didn’t work out at the combine because he has a fractured foot. He’s exactly what the Patriots need to pair with Rob Gronkowski, however, since he can split out and play in line if Gronkowski gets injured.

The 49ers need to keep grabbing wide receivers. It’s telling how bad their offense was without Michael Crabtree last season.

The Broncos have to keep adding pieces to their secondary. Verrett is undersized, but he’s one of the best athletes in the draft with tape to match.

The Seahawks might be forced to cut defensive end Red Bryant for salary cap room. Jernigan would help keep the Seahawks stout against the run while adding a pass-rushing presence. 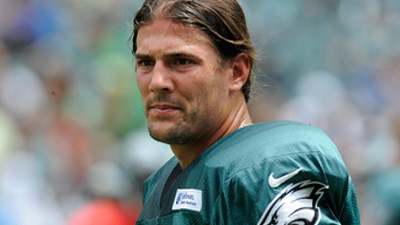