Final, Red Sox 5-2: OK, I’m back in the saddle at JetBlue Park. Let’s go over some things you missed during the final few frames of this seven-inning contest.

Ryan Lavarnway picked up his second hit of the game in the fourth inning, but was retired on the bases when he was struck by Jackie Bradley Jr.’s line drive to the right side. Lavarnway appeared to be OK.

Shunsuke Watanabe, known for his sidearm delivery, pitched the fifth inning for Boston after some more defensive changes. He retired the side in order.

The Red Sox got on the scoreboard in the fifth inning after Jonathan Herrera walked, stole second base and stole third base. Jayson Hernandez knocked in Herrera with a groundout to second base.

Noe Ramirez got roughed up a bit for the Red Sox. He gave up two runs on three hits in the sixth inning, although he will be credited with the win, as Boston’s offense responded with four runs in the bottom half of the frame.

Deven Marrero and Mike McCoy began the bottom of the sixth inning with a pair of walks. The two then moved up via a double steal and scored on an error by Northeastern’s shortstop. Scott Cousins tripled to give the Red Sox a 4-2 lead, and Jonathan Herrera’s groundout made it 5-2.

Keith Couch picked up the save for the Red Sox.

Game 2 of the doubleheader against Boston College will kick off at approximately 3:45 p.m. ET.

2:18 p.m.: The Boston Red Sox’s clubhouse has opened to the media. I’m going to shoot downstairs for some player reaction, but be sure to check back in a few minutes for more updates from JetBlue Park.

Mid 4th, 0-0: Henry Owens struggled a bit with his control in the fourth inning. The big lefty walked two hitters despite keeping Northeastern off the scoreboard.

Sean Lyons led off with a walk and swiped second base. Owens then issued a two-out walk to Justin Kessler before striking out R.J. Roman, who pinch-hit for Keith Kelly.

End 3rd, 0-0: Northeastern’s James Mulry will have an awesome story to tell his grandchildren.

Mulry struck out Dustin Pedroia and David Ortiz upon entering the game in the third inning. Mulry caught Pedroia looking and then completely fooled Ortiz with an offspeed offering.

The crowd was left buzzing after the back-to-back strikeouts, and Ortiz jokingly threw his hands in the air while making his way back to the Red Sox’s dugout.

Mulry nearly struck out the side, as he got to two strikes on Mike Napoli. Napoli won the battle with a single through the left side.

Mike Carp pinch ran for Napoli after the two-out knock. Jonny Gomes walked and was replaced by a pinch-runner in Peter Hissey.

Xander Bogaerts grounded to third base to end the inning. The Red Sox have left two runners on base in all three innings.

Henry Owens will be the Red Sox’s new pitcher in the fourth inning.

Jason Vosler and Josh Treff were retired by Dustin Pedroia at second base. Mike Piscopo grounded to Xander Bogaerts at short to end the inning.

Left-hander James Mulry will take over for Northeastern in the third inning. He’s scheduled to face Dustin Pedroia, David Ortiz and Mike Napoli. (Welcome to the game, kid.)

End 2nd, 0-0: The Red Sox again put two baserunners on in the second inning. But again, Boston came up empty.

Xander Bogaerts and Will Middlebrooks led off the second inning with a pair of flyouts.

Ryan Lavarnway made a bid to give Boston a lead, but his deep drive to left field banged off the JetBlue Monster. Lavarnway cruised into second base with a double.

Jackie Bradley Jr. worked a two-out walk to put runners at first and second for Grady Sizemore. Sizemore made solid contact to left field, but Justin Kessler grabbed it at the warning track to end the inning.

Burke Badenhop will be the new pitcher for Boston in the third inning.

Workman struck out left fielder Justin Kessler to begin the inning, and Keith Kelly followed with a ground ball to second base that Dustin Pedroia easily gobbled up.

It sounded like Mike Foster broke his bat on a two-out dribbler to the left side. Will Middlebrooks made the play and fired across the diamond for the third out.

End 1st, 0-0: The Red Sox were kept off the scoreboard in the first inning.

Grady Sizemore led off with his first live at-bat since 2011. The veteran outfielder skied a fly ball to center field that was hauled in by Connor Lyons.

Dustin Pedroia reached with a line-drive single up the middle, and David Ortiz worked a one-out walk.

Dustin Hunt retired Mike Napoli and Jonny Gomes to end the inning. Napoli popped out to catcher Josh Treff in foul territory, and Gomes popped out into shallow left field.

Mid 1st, 0-0: The Red Sox’s new double-play tandem had both a good moment and a bad moment in the first inning.

Sean Lyons led off with a single up the middle. It probably would have gone for a base hit regardless, but there appeared to be some confusion by Bogaerts and Pedroia as each chased the comebacker up the middle.

Bogaerts and Pedroia quickly brushed the seeing-eye single aside, though, as the duo turned a 6-4-3 double play to clean the bases.

Brandon Workman struck out Brad Burcroff to end the frame.

12:54 p.m.: It’s been partly cloudy at JetBlue Park throughout the morning/early afternoon. There’s no precipitation in sight, though, so it’s hard to complain.

Before the Red Sox and Northeastern get things underway, I’d like to direct you toward a few pregame links that might tickle your fancy.

The first link includes a few pregame notes, including an update on the status of Daniel Nava and Shane Victorino. The second link is my Opening Day roster projection, which obviously could change over the next few weeks as things continue to develop at camp.

These exhibition games, obviously, are important for young players and players looking to make impressions, but manager John Farrell said Thursday morning that the spring contests are equally as important for the club’s veterans.

?For everyone in camp, these games are important,” Farrell said. “Regardless of the position, we?re trying to get a foundation laid. That?s the next step in our overall preparation to begin the season. It?s good to get the games started. I know that.?

Most of Northeastern’s players have gathered around the cage during Red Sox batting practice.

Northeastern’s lineup is below.

Grady Sizemore, who is playing his first game of organized baseball since 2011, is leading off and playing left field. Farrell said Thursday morning that Sizemore likely will play all three outfield spots in time, although most of the veteran’s action will come in left field and center field.

Thursday’s Game 1 lineup is below.

10 a.m. ET: The Boston Red Sox will kick off their spring training slate of games Thursday with a doubleheader against Northeastern University and Boston College.

The Red Sox will play Northeastern in the first game of Thursday’s twin bill. Brandon Workman will start for Boston, and he is scheduled to be followed by Henry Owens, Noe Ramirez and Burke Badenhop.

Thursday marks the sixth time the Red Sox have opened their spring exhibition schedule with a doubleheader against Northeastern and Boston College. The Sox first did so in 2008, and then played the two schools every year from 2010-2013.

The Red Sox and Northeastern have squared off 12 times overall, including each of the last 10 seasons. The first Red Sox-Northeastern matchup took place on April 11, 1977, with Luis Tiant starting the game and Bill “Spaceman” Lee coming on in relief. 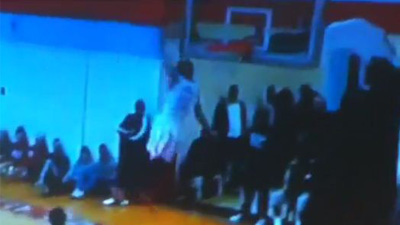