The Boston Red Sox?s outfield was dealt a serious blow this offseason when Jacoby Ellsbury signed with the New York Yankees. Overcoming Ellsbury?s loss in 2014 won?t be easy.

Ellsbury was the most dynamic player in the Red Sox?s strong 2013 outfield. His departure leaves the Red Sox with several questions, even though Boston looks well-equipped to weather the storm.

Jackie Bradley Jr., who got his first taste of major league action last season, will be given an opportunity to seize the center field job vacated by Ellsbury. Bradley will compete for the gig alongside Grady Sizemore, who has been sidelined since 2011 because of knee and back injuries.

Shane Victorino is set to return to right field this season, while Daniel Nava and Jonny Gomes likely will split time in left field. In other words, center field remains the unit?s biggest question mark, although it?s possible that other parts could begin shifting around if neither Bradley nor Sizemore seizes their opportunity.

Center field is being viewed by many as an open competition. However, it certainly seems like Bradley?s job to lose. While Sizemore?s presence spices things up a bit in spring training, it?s important to keep in mind that he hasn?t played a full season since 2008. There?s no telling what to expect from him, whereas Bradley, despite struggling last season, is considered the Red Sox?s center fielder of the future.

If both Bradley and Sizemore flop, the Red Sox could consider shifting Victorino to center field. That would result in more playing time for Nava and Gomes, who rather than simply splitting time in left field would have two corner outfield positions to man on a nightly basis.

The Red Sox would prefer Victorino stay in right field, though. Not only would that mean either Bradley or Sizemore is doing something right, but Victorino also was tremendous in right field last season. Manager John Farrell could then pick his spots with Nava and Gomes — mostly, Nava versus right-handers and Gomes versus left-handers — like he did so effectively in 2013.

Carp, who has been the subject of trade rumors this offseason, also will factor into the outfield equation, but Sizemore?s presence could cut into his outfield playing time a bit. That, of course, is if Sizemore shows the ability to play the corner outfield spots during spring training.

Carp and Nava both are capable of playing first base as well.

-The Red Sox undoubtedly were willing to let Ellsbury walk in free agency because of Bradley?s presence in the organization. Bradley, who ranked No. 40 on Keith Law?s top 100 prospects list, has a bright future, as well as the potential to minimize Ellsbury?s loss in 2014.

-Bradley already might be a better defensive center fielder than Ellsbury.

-Bradley already might have more power than Ellsbury, too.

-Bradley struggled against major league pitching last season, but there were points, particularly later in the year, when he showed a good offensive approach.

Bradley posted a .430 on-base percentage in 128 games split between High-A and Double-A in 2012. If the young outfielder can carry that type of grind-it-out approach to the majors, it?ll fit very nicely into the Red Sox?s overall offensive philosophy.

-Nava is coming off a breakout season.

-Nava is extremely versatile, both offensively and defensively. The 31-year-old switch-hitter can easily move up and down the lineup, and he can play first base in addition to both corner outfield spots.

-Gomes historically has been good against left-handed pitching, making him an excellent platoon partner for Nava, who hit .322 against right-handed pitching last season.

Gomes hit .346 (28-for-81) with runners in scoring position. He also hit four pinch-hit homers, which was the most in a season by an AL player since Matthew LeCroy hit four in 2004.

-Victorino?s .294 average in 2013 was his best mark in any full major league season to date.

The Flyin? Hawaiian led the team and finished sixth in the AL with 10 outfield assists. According to Fangraphs, Victorino led the AL with 24 defensive runs saved in right field.

-Carp made the most of his opportunities last season, and he’ll provide some left-handed pop off the bench.

Carp’s average (.296) and OBP (.362) were his highest marks in any major league season with at least 50 games played, and his .523 slugging percentage was good for eighth among AL players with at least 200 plate appearances.

-Sizemore, while a wild card, was a stud in his heyday.

-Bradley, who turns 24 in April, is being thrown into the deep end. It?s entirely possible he’ll sink rather than swim given his minimal experience at the major league level.

-Nava was tremendous last season, but his power dropped off toward the end of the year. Is it possible 2013 was a fluke?

-Nava and Gomes both seem to be OK with a platoon role, but there?s always the possibility that someone could grow unhappy with the situation if good personal results don?t immediately lead to more opportunities. It?s unlikely either player will complain, but stranger things have happened.

-Sizemore, who has had seven surgeries over the last 53 months, hasn?t played in a professional baseball game since Sept. 22, 2011. The Red Sox might discover there?s nothing left in the tank.

-Victorino dealt with wrist and hamstring issues last season. Those could linger.

-Ellsbury swiped an MLB-best 52 bases last season. The Red Sox won?t be able to replace that production, and they?ll need to compensate in other areas.

-The Red Sox don?t have a true leadoff hitter with Ellsbury gone, so Farrell could be forced to shuffle his lineups daily, especially in the early going.

Nava and Victorino are the two likeliest leadoff candidates at this point because of their on-base ability, but neither has much experience in the role.

Bradley put it best Thursday when he said, ?You can?t replace Jacoby Ellsbury.? Ellsbury is an elite leadoff hitter who is capable of impacting games in several ways, and the Red Sox simply don?t have anyone on their roster with a similar skill set.

The Sox don?t necessarily need to ?replace? Ellsbury, though. Instead, they?ll need to make up for his loss in other areas. Expect the Red Sox to remain aggressive on the bases, even if it?s not in the way of straight steals. Some added pop from guys like Will Middlebrooks, Xander Bogaerts and A.J. Pierzynski also might help mitigate the loss of Ellsbury.

It?s reasonable to expect another steady year from Victorino, good production out of the Nava/Gomes platoon and steps in the right direction for Bradley. Anything provided by Sizemore really is an added bonus given the level of uncertainty surrounding the injury-plagued veteran.

Bradley figures to be a staple in the Red Sox?s outfield for years, even if he endures some growing pains this season.

Gomes is a free agent after this season. It?s possible he?ll want a starting role, and the Red Sox might not be willing to provide that despite the strong connection between Gomes and Boston.

Victorino is under contract for 2015, so he should be the right fielder again next season if all goes according to plan.

Bryce Brentz is one player who hasn?t been mentioned who could find his way to the majors as soon as 2014 but more likely in 2015. Brentz, who is on the 40-man roster, has tremendous power, so perhaps he?d be a good replacement if Gomes leaves after this season.

Brown and Cousins are veterans with major league experience, while Linares is a 29-year-old still looking for a shot after toiling in the Red Sox?s system since 2010.

The Red Sox added Hassan, a local kid, to the 40-man roster following the 2012 season to protect him from the Rule 5 draft. It was a surprising move, but the Red Sox clearly liked his on-base ability. The 25-year-old still is on the 40-man roster, although it?s possible the Red Sox could look to outright him to Triple-A Pawtucket if they need to make space upon acquiring a player.

Ramos (turning 22 in April) and De La Cruz (turned 22 in November) both figure to start the year at Double-A Portland. Each has pop yet also some holes in their respective swings that need to be fixed.

Margot, who just turned 19 in September, still needs to develop, but his speed and instincts in center field make him an outfielder to watch down the road. 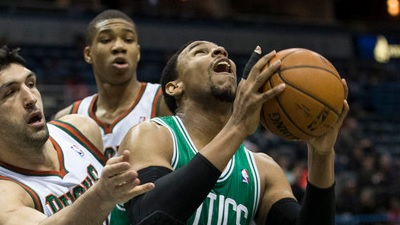