Team Canada struggled its way to the Winter Olympic men’s hockey semifinals Wednesday, surviving lowly Latvia 2-1 in the quarterfinal round. Just down the street, however, Team USA put in another ho-hum effort on its way to the semis.

The Americans earned their rematch with Canada by way of a 5-2 win over the Czech Republic in Sochi. The win, the Americans’ fourth of the Olympics, was much like their play for much of the tournament: They were the better team on the ice — and they knew it. The U.S. played another solid game, with contributions from up and down the roster.

As the Americans prepare for what will be their toughest test yet, let’s see how they graded out against the Czechs in the latest USA Hockey report card.

Forwards
Depth up front continues to be the Americans’ greatest strength. They showed that off again Wednesday, with each of their four lines contributing. David Backes was by far the best player on the ice. The St. Louis Blues captain scored a first-period goal and also made a great play to steal the puck from Jaromir Jagr and eventually fire a gorgeous pass across the slot to Dustin Brown for another tally. Phil Kessel is having an incredible tournament, and his hustle was impressive in the third period, when he crashed the net and scored. The Americans’ speed up front has been a huge weapon, and it was a difference maker against an older Czech Republic team that was playing its second game in two days.

Defensemen
Overall, the U.S. defensemen were good enough. However, they were a little shaky in the first half of the first period. The Czechs had some chances in the early going, partly because of some American breakdowns. The blueliners didn’t jump into the play as much as in the preliminary round. They still did occasionally, and it almost led to a goal when Cam Fowler ripped a shot off the post in the first period. Brooks Orpik, who hasn’t had a great tournament, took a silly interference penalty in the second period. Ryan Suter, on the other hand, has been one of the tournament’s best D-men. The Minnesota Wild blueliner added three assists and is averaging a team-high 23:08 of ice time per game. Ryan McDonagh struggled mightily in the first period, as he was on the ice for the first Czech goal and almost was responsible for another as he tried to force a puck through the neutral zone instead of carrying it over the red line and dumping it in. Despite those early struggles, the U.S. defense corps rebounded nicely.

Goaltending
Jonathan Quick wasn’t sparkling, but he was more than good enough. Like just about everyone else, Quick got better as the game went on (which also coincides with the Czechs likely hitting the wall). The first Czech goal wasn’t really Quick’s fault, as players were crashing into him and the puck would have been cleared had it not hit an American player’s skate in front. The second goal was a tough one to stop as Ales Hemsky beat Quick with a bomb. Quick’s rebound control was a little sketchy, which is something he’ll need to fix against the Canadians, who could make him pay for that.

Special teams
Once again, there wasn’t a lot of special teams play. The power play did get on the board, though, as Zach Parise finally broke through with a tremendous hustle play. Parise beat Marek Zidlicky to a loose puck at the goal line, then just flipped it to the net. That play was set up by a Joe Pavelski point shot that was deflected and went wide, with Parise winning a battle to retrieve the puck and score. The penalty kill wasn’t tested much, but the Americans now have killed 10 of 11 penalties.

Next up: Semifinals against Canada at noon ET Friday 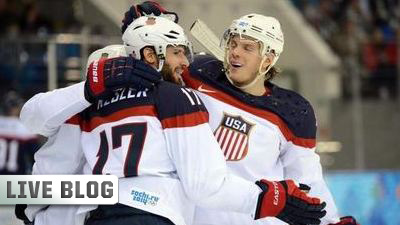