The Slovakian men’s Olympic hockey team fell one place short of a medal in Vancouver, but it can’t seem to buy a win in Sochi.

Slovakia allowed three consecutive third-period goals in a 3-1 upset loss to Slovenia on Saturday, two days after being blown out by the United States in the preliminary round of the 2014 Winter Olympics.

It was the first win in Olympic hockey for Slovenia, which qualified for the Olympics for the first time this year.

“I’m kinda speechless,” said Los Angeles Kings forward Anze Kopitar, who scored Slovenia’s third and final goal. “So happy. This is going to stick with Slovenia for a long time.”

Kopitar is the only NHL player on the Slovenian roster.

“We were playing nose to nose. But starting with the first goal, we saw that they were going to win,” Slovakia coach Vladimir Vujtek said.

Slovakia and Slovenia will finish up preliminary-round play against Russia and the U.S., respectively, on Sunday. 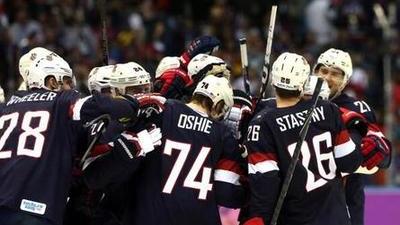