The New England Patriots are paying close attention to the top wide receivers in the 2014 NFL draft despite using two picks on wideouts in 2013.

This year’s class of receivers is supposed to be the best and deepest in recent memory, so taking Aaron Dobson in the second round and Josh Boyce in the fourth last year won’t stop the Patriots from using another high pick on a pass-catcher this offseason.

Check out which wideout the Patriots could draft at No. 29 overall in NESN.com’s latest mock draft.

Texans coach Bill O’Brien could be sending out smokescreens, but he seems to believe the second-tier quarterbacks, who include Alabama’s A.J. McCarron and Eastern Illinois’ Jimmy Garoppolo, are nearly as good as the top three or four. If O’Brien is telling the truth, the Texans likely will take Clowney with the first overall pick.

The Rams signed Jake Long to be their starting left tackle just last year, but Robinson could wind up being significantly better than the former No. 1 overall pick. Long’s presence wouldn’t prevent the Rams from taking the much-younger Robinson.

Other quarterback-needy teams have been proactive in signing veteran stopgap signal-callers, while all the Jaguars did was re-sign Chad Henne. The Jags need to find their future franchise quarterback.

The Browns can find their starting quarterback later; they need to find him some offensive help first, though. Josh Gordon proved to be a legit No. 1 option at wide receiver, but he’s also unpredictable off the field.

Matt Schaub can be a stopgap, and Bortles likely needs time to develop. The Raiders also need help at wide receiver, but they can find that later in this deep draft.

The Falcons shouldn’t be too many pieces away from competing for the NFC South again soon. They need to get wide receiver Julio Jones back and healthy, and they need to find some protection for quarterback Matt Ryan.

Mack is a versatile player who could start at strong-side linebacker and potentially morph into a defensive end. He’ll likely rush from the edge on third down, regardless.

Manziel is constantly compared to Hall of Fame quarterback Fran Tarkenton, so why not complete the link by sticking Johnny Football on The Mad Scrambler’s former team?

The Bills are full of No. 2 and 3 receivers, but they lack a true No. 1. At 6-foot-5 and 231 pounds with speed, Evans will be an imposing target for quarterback EJ Manuel.

The Lions could look to draft a raw pass rusher for the second consecutive season. Barr, like Mack, has versatility. He could play strong-side linebacker or defensive end in the Lions’ 4-3 defensive alignment.

Some draft analysts consider Mosley to be the second best defensive prospect in the draft. He’s a safe pick who could become the next great Alabama linebacker to make the pros.

Lewan has some off-the-field concerns, but he could wind up being a better pro left tackle than Matthews. Lewan has incredible athleticism for his size and entered the 2014 season above Robinson on most draft boards. The Giants need a top-tier blind-side protector.

Gilbert has the highest potential of any cornerback in the 2014 draft, and the Rams need an elite cover man to play across from starter Janoris Jenkins. Gilbert has the size (6-foot) and speed (4.37-second 40-yard dash) that all NFL teams are looking to find.

The Bears lost three-technique defensive tackle Henry Melton in free agency to the Dallas Cowboys, but they could find an even better player in Donald. He ran the 40-yard dash in 4.68 seconds at 285 pounds.

The Steelers must have a lot of faith in second-year pro Markus Wheaton, who caught just six passes for 64 yards in 2013. Pittsburgh has lost Mike Wallace, Emmanuel Sanders and Jerricho Cotchery over the past two years. They could use a huge target such as Benjamin to shore up their receiving corps.

Clinton-Dix might not fall this far, because nearly every team could use a strong safety with coverage skills like the former Crimson Tide star possesses. The Cowboys would be lucky to scoop him up at No. 16.

With Michael Oher gone, the Ravens don’t have an obvious fit for right tackle. Martin immediately could come in and start in Baltimore.

The Jets already have one solid tight end in Jeff Cumberland, but they could move to more two-tight end sets with Ebron at the flex position. The Jets lack offensive weapons.

Su’a-Filo might be seen as a reach at No. 19 overall, but the Dolphins desperately need offensive line help after last year’s bullying scandal.

Ealy is a good fit in the Cardinals’ system because he has the agility to play standing up at outside linebacker, and he has the upside to fit as a five-technique defensive end in the future.

Pryor doesn’t have the best coverage skills, but he can lay the lumber in the middle of the field. The Packers need help at safety.

The Chiefs need another top-tier wide receiver to play across from Dwayne Bowe, and they didn’t acquire anyone in free agency. Beckham is a reliable, dangerous wideout.

With Michael Johnson gone to the Buccaneers, the Bengals need another edge rusher. Ford likely will start out as a situational player, but he could develop into a three-down starter.

Nix has the size to be a two-gap run stuffer and the lateral agility to make plays. The Chargers could use a high-upside nose tackle in their 3-4 scheme.

The Browns wait for a signal-caller, and it could paid off with Carr. If he can’t start right away, the Browns have Brian Hoyer as a stopgap.

The Saints need to keep building their defense, and Fuller is a big, fast cornerback with tons of upside. The Saints can find receiver help later in the draft.

The Panthers released Steve Smith and lost Brandon LaFell and Ted Ginn Jr. in free agency, so they could use some help at wide receiver. Cooks is a dangerous player who should fit well with quarterback Cam Newton.

The Patriots spent a lot of time with Lee at the combine, and they have shown interest in other top wideouts such as Evans and Benjamin. Lee is a nice fit for the Patriots’ offense and could challenge Dobson and LaFell for the starting job at “X” receiver. Lee had highly productive freshman and sophomore seasons with the Trojans, but a knee injury slowed him in 2013.

The 49ers are pretty stacked, but they still could use some help at wide receiver and cornerback. With the top wideouts gone, the 49ers can take Roby, who has some shaky tape but high upside.

Shazier might not fall this far, but if he does, the Broncos will be happy to scoop him up. Starting middle linebacker Wesley Woodyard signed with the Titans in free agency, and the Broncos could use another cover linebacker. Shazier likely projects at weak-side linebacker, and Danny Trevathan could move to the middle.

The Seahawks could go in a number of different directions at No. 32, with defensive linemen Timmy Jernigan and Ra’Shede Hageman still available. Verrett is undersized for a Seahawks cornerback, but Seattle could use a top-tier slot cornerback with Walter Thurmond gone. 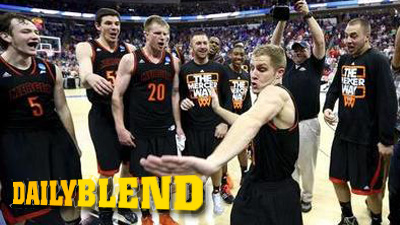 Roddy White Will Honor Duke-Mercer Twitter Bet After All