Avery Bradley couldn’t miss. For a six-minute stretch in the second quarter, Bradley put the ball in the hoop like he was throwing it through football uprights. He was, to use an overused phrase, on fire.

By the end of Bradley’s white-hot quarter, in which he dropped 18 points and hit all eight shots he took, the Boston Celtics saw their deficit grow by four points. And that, right there, was the perfect summation of their 114-98 loss to the Brooklyn Nets.

All the scoring in the world couldn’t save the Celtics (23-47) on a night they didn’t defend, period. Bradley finished with 28 points, Rajon Rondo compiled 12 points and 12 assists and Kris Humphries tallied a respectable 12 points and eight rebounds. But nobody in a green jersey did anything at the defensive end to warrant a victory over the Nets (36-31) or anyone else.

“(Bradley) is the only reason it was even respectable,” Celtics coach Brad Stevens told reporters in Brooklyn. “We weren’t very good on the defensive end of the floor, and when Avery started going off, we just accepted trading baskets instead of really getting stops.”

Don’t bother looking for an X’s and O’s explanation for the defensive breakdowns. The Celtics were beaten 62-30 on points in the paint, allowed Brooklyn to shoot 56 percent, gave up 18 points to rookie center Mason Plumlee and watched Joe Johnson go 6-for-8 on 3-pointers, part of a 27-point performance in a game the Nets shot 53 percent from three as a team. The effort on defense simply wasn’t there.

“We didn’t provide much resistance all night,” Stevens said. “At halftime, we would’ve liked to say it was scheme or (whatever), but I don’t know that we ever provided just one-on-one, isolation resistance.”

The Celtics have four days until their next game. That’s a long time to look at themselves in the mirror and decide whether they can find some semblance of defensive intensity between now and then, or if they’re fine with just sleepwalking through the final month and getting this season over with.

Cue Hansel from Zoolander. The Nets are so hot right now.

Friday’s win was their third in a row and 12th in 16 games since the All-Star break. They’ve hopped all the way up into a virtual tie with the Chicago Bulls for the fourth spot in the Eastern Conference, with both squads holding 31 losses.

It’s not just Paul Pierce, Deron Williams and Johnson, either, although those guys have obviously helped. It’s the random big nights by Plumlee, Shaun Livingston and Mirza Teletovic that have made Brooklyn really scary.

“They’re playing at a high level,” Stevens marveled. “We’ve gone through now and we’ve seen some of the better teams in the East, and we’ll see Toronto and Chicago and Washington coming up over the next five games, but this team’s starting to really play. That’s a different team than the first three times we played them.”

The Celtics finish the first season post-Pierce with a 1-3 record against their former captain’s new team. If they played another four times, it would be a shock if the Celtics were even able to steal one game, based on the way both teams are playing now. 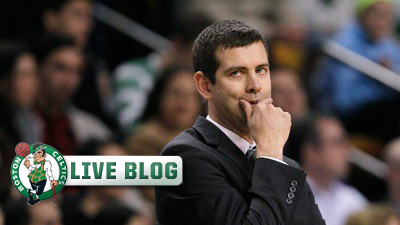