Boston Marathon Survivor To Dance On 'Dancing With The Stars' With Prosthetic Leg - NESN.com Skip to content It’s been almost a year since Patriots’ Day in Boston was rocked when two bombs exploded at the finish line of the Boston Marathon, and 33-year-old Adrianne Haslet-Davis — who was injured in the incident — is determined to dance again.

Haslet-Davis lost her lower left leg while watching the marathon. The lifelong dancer said the toughest part about her recovery was she couldn’t do the one thing that would have helped clear her head.

On Wednesday, Haslet-Davis will dance in front of a crowd for the first time since before the bombings. Haslet-Davis will take the stage at the 2014 TED conference in Vancouver wearing a prosthetic leg ?fit for dancing.? Haslet-Davis said she’s also working on dates to appear on the ABC show “Dancing With The Stars.”

Hugh Herr, director of biomechatronics at MIT?s Media Lab, designed the prosthetic leg for Haslet-Davis after the two met at Spaulding Rehabilitation Hospital in Boston.

Herr has been a double amputee since a climbing accident in 1982, and he went on to revolutionize prostheses at MIT. Herr is unveiling Haslet-Davis’ prosthetic dancing leg for the first time Wednesday. He said the goal was to design a natural, nuanced limb that’s responsive to Haslet-Davis?s body movements.

?We brought in dancers with biological limbs that were a similar size and weight,? Herr said. ?And we studied, using all of our equipment, how they moved and the forces they applied on the dance floor and analyzed those data. It took many, many months, but here we are.?

Haslet will perform a rumba on Wednesday to Enrique Iglesias’ “Ring My Bells.” 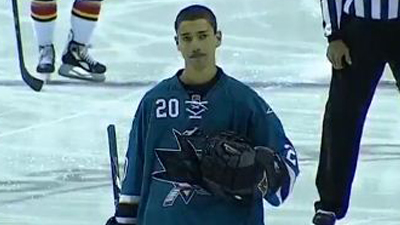