Added Salazar: ?We provided oxygen for him. We started an IV. We did chest compressions on him and defibrillated him, provided some electricity to bring a rhythm back to his heart, and that was successful with one attempt, which is very reassuring.?

?It was the same thing,? Stars coach Lindy Ruff said last week, per the Morning News. ?He?s been monitoring it the whole year and this might have been the first or second time it?s come around, but it?s something he has to deal with and it?s something that obviously we?re aware of.? 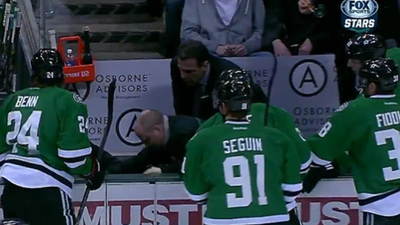 Bruins: Our Thoughts And Prayers Are With Rich Peverley After Collapse