Vote: Which Patriots Player Is Most Likely To Return Next Season? - NESN.com Skip to content The New England Patriots have a lot of tough decisions to make in free agency over the next few weeks.

Julian Edelman is the team’s top offensive free agent, and if he’s not re-signed by Monday, the 27-year-old wide receiver likely will receive a good amount interest on the open market after a career year in which he led the Patriots in receptions, receiving yards and receiving touchdowns. Edelman was one of the team’s best players last season, and given the team’s injury concerns and lack of consistency at receiver, re-signing him should be high on the Patriots’ offseason to-do list.

Another Patriots star entering free agency is starting cornerback Aqib Talib. The 28-year-old veteran is the best defensive back on the team, but injuries have prevented him from staying on the field consistently. One of the primary reasons for the Patriots’ losses in the last two AFC Championship games was the absence of Talib in the second half due to injuries. When he’s healthy and on the field, the Patriots’ pass defense is drastically better. The question surrounding Talib is what kind of contract will he get on the open market. Lots of teams need depth at cornerback, and some of them may offer him an amount of money that the Patriots won’t want to match.

Vince Wilfork isn’t a free agent, but his future in New England is uncertain because his enormous contract eats up a good portion of the salary cap. The 32-year-old veteran is recovering from season-ending Achilles injury and isn’t the elite player he used to be, but his absence was noticeable last season. The Patriots struggled to defend the run without Wilfork’s presence in the middle of the defensive line, finishing 30th in rush yards allowed per game.

New England could free up cap space by releasing Wilfork, but the team doesn’t have another defensive tackle of his caliber to replace him with at the moment.

Which Patriots player is most likely to return next season? Vote in the poll below. 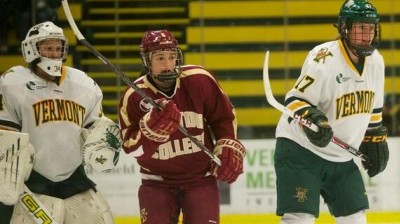