FORT MYERS, Fla. — The result would have been concerning if the calendar said ?April.? But since it’s still the early stages of spring training, the Boston Red Sox can take a step back and focus on the positives coming out of their 8-0 beatdown at the hands of the Tampa Bay Rays on Tuesday.

Clay Buchholz made his spring debut at JetBlue Park on Tuesday, surrendering one earned run on three hits in an inning of work. He struck out one and walked one while throwing 26 pitches (14 strikes).

Buchholz said after Tuesday?s outing that everything felt good physically, which is an encouraging sign for the right-hander, who dealt with neck and shoulder issues throughout last season.

For more on Buchholz and other Red Sox happenings, check out Tuesday’s notes below.

-Buchholz, in addition to tweaking some early mechanical flaws, continues to work on making nutritional adjustments. The Red Sox put the pitcher on a new diet in the hopes of increasing his durability.

-Buchholz, as he typically does, worked very methodically with runners on base Tuesday.

“He does slow the game down, no question,? manager John Farrell said after the game. ?But that’s the way he keeps it under control, so, again, I’m not going to make too much of the first outing here. But somewhat of what we’ve seen today, you see that during the season.”

-Grady Sizemore again looked good physically. The outfielder, who went 0-for-2 with a walk, got down the line well and hasn?t skipped a beat timing-wise at the plate.

-Farrell said Sizemore — a former 30-30 player — likely won?t attempt any stolen bases over the next few games, as the 31-year-old still is getting his feet under him.

-Xander Bogaerts hit a couple of sharp line drives that found leather. It was the 21-year-old?s defense that stood out, though.

Bogaerts made an excellent diving stop on a ball hit into the hole by Matt Joyce in the first inning. The shortstop popped up, planted his feet and delivered a strong throw, although Joyce just beat it out.

“I think what we’re seeing is the range that we’ve talked about with him,? Farrell said. ?There’s always been subjective comments about whether he’s got the range to play the position, and what we’ve seen, before camp even opened and the work in games, is that he should be fine at the position defensively.”

Bogaerts, of course, played third base during the playoffs last year.

-Jon Lester will throw a simulated game at Fenway South on Wednesday. He?s scheduled to get up and down three times during the session.

-Shane Victorino participated in full baseball activities Tuesday and came out of everything without any issues, according to Farrell. 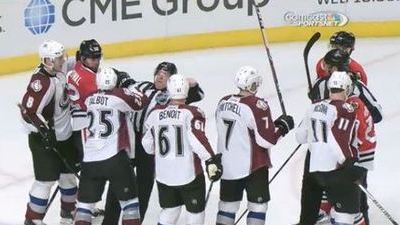 Linesman Gets Decked In The Face During Avalanche-Blackhawks Game (Video) 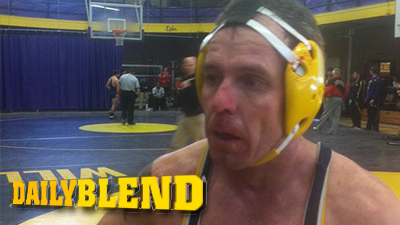 Grandfather Is Co-Captain On University Of Southern Maine Wrestling Team