Boston Bruins forward Brad Marchand has been a focal point in the B’s first-round Stanley Cup playoff series against the Detroit Red Wings. Had the Bruins lost Game 4 on Thursday night, the pesky winger would have certainly been the goat.

Marchand missed not one, but two wide-open chances that could have made life a lot easier for the Bruins. Marchand had empty nets staring him in the face on two occasions — once in the first period and another in the third — but he missed both of them.

Luckily for Marchand, however, the B’s were able to come back from being down 2-0 to tie the game in the third period. Then, in overtime, Jarome Iginla’s first career playoff overtime goal gave Boston the 3-2 win. The Bruins now head back to Boston with a 3-1 series lead, and Marchand is off the hook.

For that, he is obviously very grateful.

“I think I gave him a huge kiss there,” Marchand told reporters, according to the Boston Herald. “It was great to have him score that goal and I’ll be able to sleep good tonight.”

Marchand’s missed opportunities would have likely been dissected even more given the role he’s played in the series thus far. He hasn’t been too far from the spotlight through four games, and he became a villain in Detroit for supposedly diving in Game 3 after being tripped by Brendan Smith. Maybe that extracurricular activity has taken some of Marchand’s focus away.

“I think I’m at my best when I’m just playing hard and gritty,” Marchand added. “I think I’m going to try to stay out of scrums the rest of the series and just think about playing. I think I might be focusing a little too much on other stuff and that’s why I’m missing opportunities. I’d rather help my team out on the scoresheet than other ways.”

Marchand, who had 34 playoff points in 54 career playoff games entering this series, is still looking for his first point of the series. 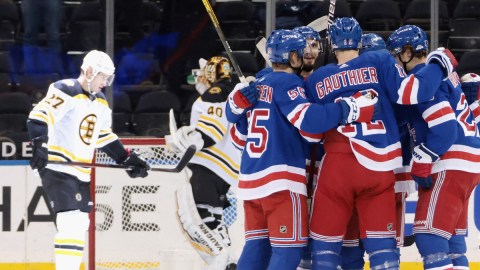