Bruins Doing Best To Be Ready For Whenever Canadiens Series Begins - NESN.com Skip to content BOSTON — The Bruins and Montreal Canadiens will start their second-round Stanley Cup playoffs series at some point, or so we’re told.

Hockey fans are waiting (somewhat) patiently for the two longtime rivals to start their series, or at the very least for the second-round schedule to be released. The Canadiens last played on April 29, and the Bruins wrapped up their first-round series on April 26, yet the NHL has yet to announce when the second round will begin. The best bet is that Game 1 will be late this week or even over the weekend, an uncertainty that’s leaving fans feeling pretty antsy.

The long layoff is bittersweet for those with the most at stake — the players and coaches. The Bruins returned to practice Tuesday after two days away from the rink following their first-round series win over the Detroit Red Wings, and they’re doing their best to take things in stride.

“It?s not that bad actually,” Bruins coach Claude Julien said. “We know it will start soon after the Game 7s are done, so we anticipate somewhere beginning of the weekend or the weekend. That is our anticipation, so we?re preparing, more or less, for around those times.”

Apparently, some things still need to be ironed out before the schedule can be released. The second round can’t begin until all of the other first-round series end. Not only that, but TV schedules need to be settled, and they must be done around already-scheduled building commitments in cities across the NHL. It’s a bit messy, and it’s making for quite the build-up.

“You want to start playing right away when you see the other series going on,” Bruins center Patrice Bergeron said. “The end of the first round — when you see hockey on TV, you always want to be back there. But as I’ve said before, you can’t control anything. It’s about making sure you’re ready when it’s that time.”

The long layoff requires a delicate balance. There are advantages to having some time off, especially in the middle of one of sports’ most grueling tournaments. The break allows teams to get healthy, but there’s a fine line between getting healthy and getting rusty. Guarding against the latter will be something both teams must focus on in the coming days.

“It’s good and bad. If you ask anybody, you can rest some bumps and bruises and yadda, yadda, yadda,” Bruins defenseman Johnny Boychuk eloquently stated. “But it’s also bad because you’re in playoff mode and you have a week off. You go from going as hard as you can to not doing anything. And then you come to practice and you try to get back into it. … You have to just keep your legs moving and your focus on the task at hand.”

The long layoff will make it even more important to have a good start to the series — whenever that might be. 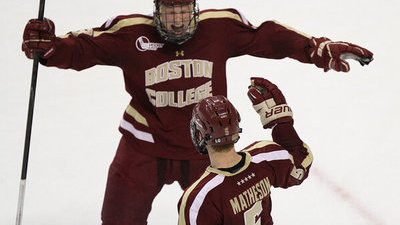 Defenseman Michael Matheson Will Return To BC For Junior Season