The first-round playoff series between the Anaheim Ducks and Dallas Stars has been chippy to say the least in its early going.

During the first period of Friday night’s game, Ducks forward Corey Perry only added to the heightened physical play when he took exception to a check from behind courtesy of Stars forward Jamie Benn. Perry wasted no time retaliating, as he delivered a cheap shot and speared Benn below the belt.

Perry received a minor penalty for slashing, and Dallas scored on the ensuing power play, but that wasn’t enough revenge for the Stars. Later in the period, Perry got tangled up with Dallas defenseman Trevor Daley following a scramble in front of the net. Daley wrestled Perry to the ice and wouldn’t let him go before landing a couple of solid shots on him.

Daley was assessed a two-minute minor for roughing on the play.

After two periods of physical play, the Ducks lead the Stars 2-1, and are just 20 minutes away from taking a 2-0 series lead. 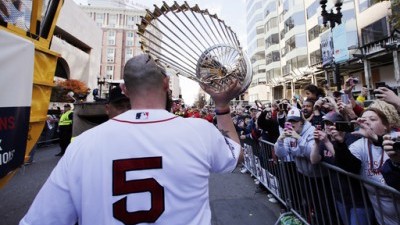 Jonny Gomes: Marathon Resilience Shows Boston ‘Not An Area To Mess With’