There is nothing like a few weeks of excitement to make people overlook the months or even years they have spent evaluating a player.

To be fair, fans are more susceptible than scouts to the type of irrational exuberance that accompanies the NCAA tournament. But NBA team executives and their scouting departments wouldn’t be doing their jobs if they failed to analyze all the information at hand about any given prospect. The longer a college player’s team stays alive in the tournament, the more opportunities pro scouts have to judge their talents.

As Florida, Wisconsin, UConn and Kentucky get ready for the Final Four, it’s clear that some players’ draft stocks were affected by their March performance. Whether those effects were positive or negative depends on the player.

We took a look at five names that have come up a lot, in terms of NBA draft-readiness, in the last week to provide a snapshot of their current draft prospects. We also averaged each player’s location in five mock drafts or draft big boards — DraftExpress, Sports Illustrated, ESPN, CBS Sports and NBADraft.net — to get a crowd-sourced feel for where they might be taken.

Shabazz Napier, UConn
Remember Kemba Walker’s 2011 NCAA tournament run? Napier had better hope scouts do. Although Walker began as a higher-rated prospect than Napier, there’s no question Walker’s epic title run helped his draft stock. (He went ninth overall.) Even better for Napier, Walker has turned into a productive pro, not just another Mateen Cleeves or Tyus Edney, who made fans fall in love with them as collegians before fizzling out in the NBA, so teams have less reason to be gun-shy.

What they’re saying: “I think he’s a first-round pick. First of all, he’s got the ball on a string, great ball control, great understanding of the game. He’s got tremendous confidence, he’s a knockdown shooter from the perimeter. And he’s got a big heart.” — an unnamed Eastern Conference scout speaking to David Borges, New Haven Register

Frank Kaminsky, Wisconsin
He’s 7 feet tall, with a seemingly endless array of shots he actually can make, and he can even rebound and defend. Somehow, Kaminsky slipped below not just the radar of scouts, but Badgers coach Bo Ryan, too, as he spent the last two years basically making sure the bench didn’t float away. There has been legitimate debate as to whether or not a guy who was a no-name a couple of weeks ago should leave school early for the draft. (He probably shouldn’t.)

What they’re saying: “Unstoppable. That’s what Kaminsky was against one of the best defensive frontcourts in college basketball, even when guarded by top-10 pick Aaron Gordon.” — Peter Bukowski, SI.com, following Kaminsky’s 28-point, 11-rebound performance against Arizona

Mock draft average: N/A (Kaminsky is not listed on any of the five mock drafts.)

Julius Randle, Kentucky
He’s been a clear top-five pick since the beginning of the season, and he actually dropped on a number of analysts’ “big boards” lately, but Randle is the most dominant player in the Final Four. He’s undersized, but he’s tenacious, and he was the least-disappointing member of the underachieving Wildcats before they got their acts together.

What they’re saying: “Randle continues to be the top prospect on this team and has played like it in the past four games, playing like a man among boys. Despite persistent double-teams, Randle has been willing his way to the basket and averaging an impressive 12 rebounds per game in the tournament. Randle still struggles with length, and his jump shot hasn’t been falling, but his determination in the paint has helped him maintain his status in the top five.” — Chad Ford, ESPN.com

Doug McDermott, Creighton
Comparisons to Larry Bird were the kiss of death for Adam Morrison, Keith Van Horn, Christian Laettner and others. So it shouldn’t be too surprising that scouts are rethinking their assessment of McDermott as the draft approaches. He’s one of the greatest scorers ever at the college level, for sure, yet doubts have arisen over how his skills will translate to the more athletic NBA. He was held to 15 points in a 30-point loss to an athletic Baylor squad in the round of 32.

What they’re saying: “Here’s a constant question heard about McDermott: What are teams going to think at the combine, when he doesn’t test well athletically? What if he gets beat up in individual workouts? And is he going to be able to defend NBA small forwards?” — Chris Mannix, SI.com

Adriean Payne, Michigan State
The Spartans’ senior big man appears to have made the right call by staying in school. He showed a complete offensive arsenal in the tournament, from old-school back-to-the-basket post moves to pick-and-pop 3-point accuracy. His 6-foot-10 body and versatile skill set make him tailor-made for a long NBA career.

What they’re saying: “He’s one of the most difficult matchup problems in the country, a big man who can take smaller defenders to the block or draw shot-blockers out to the perimeter. When Payne is aggressive and making shots, he looks like a lottery pick.” — Jeff Borzello, CBSSports.com, following Payne’s 41-point performance against Delaware

Highest: 15th on SI.com’s Big Board 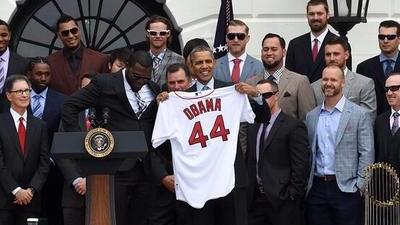 Mike Napoli: ‘I Chuckled’ When President Obama Mispronounced My Name