The Boston Bruins have taken a commanding 3-1 first-round series lead with a 3-2 overtime win in Thursday night’s Game 4 against the Detroit Red Wings.

After the Red Wings opened a 2-0 lead in the second period, the Bruins fought back to tie the game in the third period and force overtime. Boston proceeded to dominate the extra period with consistent offensive zone pressure and by creating the majority of the scoring chances.

The game ended when Jarome Iginla deflected a shot from the half wall by Dougie Hamilton past Detroit goaltender Jonas Gustavsson. It’s the first overtime goal of Iginla’s playoff career.

Boston has a chance to end the series in Game 5 Saturday afternoon at TD Garden.

Check out the game-winning goal in the video and GIF below.

GIF above courtesy of @PeteBlackburn. 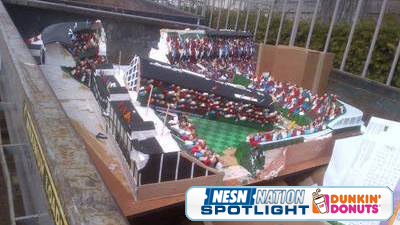