Jeff Green waited for the media mob to surround Rajon Rondo, then quickly gathered his things and slipped out. On the final night of a disappointing season, the Boston Celtics’ supposed go-to scorer left the locker room without fielding a single question from a reporter.

It was a fitting end to Green’s season. Entering the year with tough talk about becoming the team’s No. 1 option, Green often ceded the spotlight to someone else, then disappeared altogether.

By the end, even reporters who noticed Green sneaking out while they interrogated Rondo hardly cared anymore. There was nothing left to ask Green, anyway. The results spoke for themselves.

If all the talk about Green’s limitless potential was to be believed, this should have been a breakout season for him. Rondo missed 52 games. Rookie NBA coach Brad Stevens would have welcomed an offensive crutch to lean on while he learned the rhythm and X’s and O’s of the professional game. When healthy, Jared Sullinger sucked defenders into the post and Avery Bradley’s improved shooting stretched defenses to create spacing for Green’s slashing.

Besides a couple of 30-plus point outbursts and a game-winning fadeaway against LeBron James and the Miami Heat, though, there was little for Green to celebrate.

“I think Jeff had a good year this year,” said Danny Ainge, Celtics president of basketball operations. “Jeff has been consistently a good 3-point shooter and very good in transition offense throughout his whole career, and I think he got even better at that this year. He got more versatile, in that he wasn’t more of a below-the-crease or corner 3-point shooter. He shot the ball from all over the 3-point line. He shot the 3-point shot off the dribble.

“Things that we wanted and encouraged him to do to expand his game, (he did). He became more of a focal point of the offense at certain times. He had his ups and downs with that, but I think his game is complete and he’s improving as a player. I think he’s got a lot of growth still left in his game, and I think he’s going to have a better year next year than he did this year.”

Aside from the part about the Celtics’ endorsement of Green expanding his role, almost nothing in Ainge’s evaluation is accurate. Green has never been a great 3-point shooter off the dribble or above the break, and while he can get to the rim seemingly at will, he seldom asserted himself to do so. He somehow pulled off the difficult trick of posting a career-high usage rate (23.6 percent) while falling significantly in player efficiency rating (to 13.1 from 15.0 last season). Watching the Celtics’ defensive series, it was clear Green was one of the team’s least reliable team defenders — including late-comers like Chris Johnson and Chris Babb.

Simply put, Green’s team-high 16.9 points per game is only impressive to someone who evaluates the game based solely on a traditional box score.

Ainge does not, obviously, which makes his remarks all the more transparent an attempt to help Green’s trade value. He might have been doing the same when he said Rondo was due to have “the best year of his career next year.” Just about everyone thinks Ainge has big changes in store this offseason, and that process could begin with shedding Green and Rondo.

Whatever one thinks about Rondo, however, he has shown he can be useful to a winning team. Green, for all his talents, failed this season to show he could even be useful to a losing one. 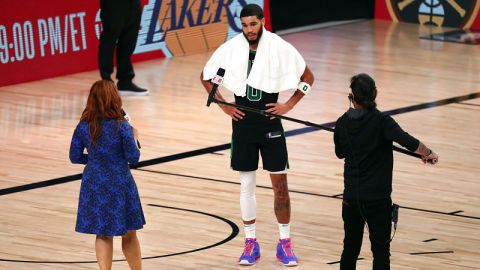