Final, 2-1 Liverpool: Game over. Liverpool is back on top of the standings thanks to its ninth-straight Premier League victory.

West Ham made it difficult, but Liverpool’s quality and confidence shone in the second half. The Reds upped their tempo and made a slight tactical adjustment, which helped them dominate possession in the second half and create openings in the West Ham defense.

The decisions of referee Anthony Taylor will be major talking points, as they had direct bearings on each goal — the second two were contentious.

The Reds now lead second-place Chelsea by two points and Manchester City by four, although City has two games in hand. Liverpool hosts Manchester City next Sunday in what will be one of the biggest games at Anfield in many years.

90th minute +2, Liverpool 2-1: Sterling nearly rifles in a third goal for his team, but Adrian keeps his team in the game with a diving save.

87th minute, 2-1 Liverpool: Sterling sends Suarez in on goal with a through ball, but Adrian makes the save after rushing off his line.

86th minute, 2-1 Liverpool: Armero is cautioned for tugging Suarez’s shirt after the Uruguayan slipped by him on the far side.

This time, the Uruguayan took a first-time shot with the outside of his foot from the right side of the area. It would have been a sensational goal.

81st minute, 2-1 Liverpool: Sturridge looks to seal the result with a powerful left-footed shot, but the well-positioned Adrian makes the save.

79th minute, 2-1 Liverpool: Nocerino is cautioned for a foul on Flanagan.

The Liverpool captain hit it high, hard and accurately to Adrian’s right.

Gerrard continues to display a stunning penalty prowess this season.

69th minute, 1-1: Adrian brings Flanagan down, and the referee awards Liverpool another penalty.

Lucas played the pass forward to the Liverpool fullback. Adrian initially stopped Flanagan’s run but held him down as he tried to stand up.

67th minute, 1-1: Nocerino is coming on for Nolan, as West Ham makes its first substitution. It’s a straight swap in the attacking midfield.

60th minute, 1-1: Sturridge rolls a shot from distance. Adrian makes another easy save.

Liverpool is putting West Ham under further pressure but, much like in the first half, finds it difficult to create scoring chances due to a lack of space and the Hammers’ robust defense.

Liverpool made one change during the break, replacing Coutinho with Lucas Leiva.

Halftime, 1-1: It’s all square at the Boleyn Ground after 45 minutes.

A largely uneventful first half came to life just before halftime, as Gerrard scored from the spot and Demel leveled the score three minutes later. The scoreline reflects the stalemate that was the first period. West Ham manager Sam Allardyce won’t win popularity contests or style points with his game plan, but it was effective enough to slow Liverpool’s high-powered attack.

The Reds did a good job of containing Carroll, as Sakho and Skrtel won the majority of aerial duels. The Hammers have threatened down Liverpool’s right through Downing, but they haven’t created many scoring chances. Their goal came from a set-piece, which they had hoped to do coming into the game.

With the score tied once again, don’t expect West Ham to break out of its shell anytime soon. Liverpool must be more precise with its passing and shooting when it gets into the West Ham third of the field. Rodgers may want to take a more direct approach, preventing West Ham from packing players behind the ball. Gerrard’s dangerous long ball set up Suarez just before the penalty. It might keep working in the second half.

Mignolet was trying to catch a corner kick when Carroll appeared to foul him, causing him to drop the ball. It fell fortunately to Demel, who tapped it in from close range.

The referee conferred with his assistant before allowing the goal.

Adrian dove to his right, Gerrard slotted it to the left. Liverpool leads.

It’s a big goal for the Liverpool captain, as he moves level with “King Kenny.”

Gerrard first sent Suarez into the penalty area with a long pass forward. Suarez tried to flick it over Tomkins, but the ball hit the West Ham defender’s hand. The referee shows Tomkins a yellow card.

West Ham continues to deny Liverpool space in its half. The extra bodies in the Hammers’ midfield allows them to pressure Liverpool when it tries to play through the midfield, while containing the Reds’ trio of attackers at the same time.

33rd minute, 0-0: Sakho’s foul on Carroll gives West Ham a free kick in a dangerous area, but Noble’s shot is off target.

It was good build-up play from the Reds.

20th minute, 0-0: Suarez hits the post with a curling effort.

17th minute, 0-0: After an energetic opening, the game is slowing down.

West Ham has packed the midfield with five big (in size) players, making it hard for Liverpool to combine in that area of the field and unlock the defense.

The Hammers are dropping deep and staying compact when defending. When they gain possession, they often play it forward to Carroll, who looks to flick it on to a running teammate. It’s a cautious, but effective, approach from the home team.

Ninth minute, 0-0: It has been a fast and open start, as both teams are keen to move the ball forward as quickly as possible and put their opponents’ defense under pressure.

Third minute, 0-0: Suarez hits a free kick from distance — about 35 yards out — which flew just over the crossbar.

First minute, 0-0: The game is underway.

Pregame: Liverpool makes just one change to the lineup which beat Tottenham last week, as Sakho starts in defense next to Skrtel.

Sakho is big, fast, strong and good in the air. The French defender will undoubtedly battle with Carroll throughout the game. It’s Sakho’s first start in 2014. A thigh injury kept him out of action in January and February.

Daniel Agger reportedly suffered a foot injury in practice this week. He’s not in the gameday squad.

West Ham has changed its defense from its last game, bringing in Tomkins and Armero.

Meanhwhile, the Hammers have a couple of American guests at Boleyn Ground. Indianapolis Colts quarterback Andrew Luck and tight end Colby Fleener are attending the game.

9 a.m. ET: Liverpool’s recent surge has it locked in the Premier League title race as the thrilling season nears its conclusion.

Liverpool visits West Ham United on Sunday in the latest test of its title credentials. The Reds are seeking their ninth-straight win, which would take them back to the top of the league standings.

After struggling through the first half of the season, West Ham has regrouped and turned their campaign around. The Hammers have won seven of their last 10 league games, and another victory would effectively guarantee Premier League survival for another season.

Liverpool manager Brendan Rodgers will stick with both the same squad and approach that has taken his team to rarefied heights. The “SAS” duo, Luis Suarez and Daniel Sturridge, will break more goal scoring records if they breach the West Ham defense. Jordan Henderson is expected to play his 100th game in a Liverpool jersey.

Sunday’s game kicks off at 11 a.m. Join us right here for all the action from the Boleyn Ground. 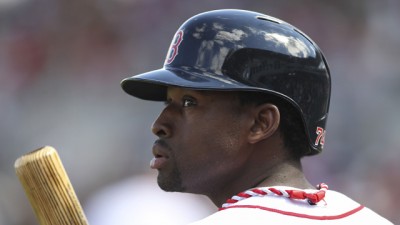 Jackie Bradley Jr. Gets Start In Center Field For Red Sox Vs. Brewers