BOSTON — Long after New York Yankees starter Michael Pineda was sent to the showers to scrub off the residue smeared all over the side of his neck, Red Sox starter John Lackey wrapped up one of his best performances in a Boston uniform.

Pineda?s stupidity actually might be the more impressive feat, as his blatant use of pine tar Wednesday is almost incomprehensible for anyone with a few lingering brain cells. But once the hilarity of Pineda?s recklessness wears off, it should be easy to recognize that Lackey?s stellar effort against the Yankees was the far more important development in the Red Sox?s 5-1 win at Fenway Park.

Lackey was absolutely tremendous. The right-hander tossed eight innings of one-run ball in which he allowed seven hits and didn?t walk anyone. Lackey punched out a season-high 11 batters while consistently hitting his spots with his fastball and effectively keeping the Yankees off balance with his curveball. It truly was a thing of beauty in comparison to the subpar efforts turned in by Clay Buchholz and Jon Lester on Monday and Tuesday, respectively.

?He was outstanding,? Red Sox manager John Farrell said. ?We staked him to an early lead. He made a number of big pitches, particularly with men on, (threw) a lot of strikes, pitched ahead in the count, had very good fastball location, a good and much more consistent curveball tonight. But more than anything, it was his ability to stay out of the middle of the plate. That?s an offense that can do a lot of damage quick, and he slowed them down with good location and a good breaking ball.?

Lackey?s superb outing came at a pivotal time for the Red Sox, whose bullpen had been taxed in recent days because of poor starting pitching. Reliever Alex Wilson was recalled from Triple-A Pawtucket before the game to provide an additional arm, but Lackey ensured the only reliever required would be closer Koji Uehara to record the final three outs.

“I was thinking about trying to give the bullpen a rest, for sure,” Lackey said after notching his third win. “We’ve got some guys down there who’ve been worked pretty good the last week or so, so I was trying to give those guys a little bit of a breather and win a ballgame.?

Lackey gave the Red Sox exactly what they needed. But his dominance still played second fiddle to Pineda?s second-inning ejection, mainly because of how negligent it was of the Yankees starter to lather himself up in pine tar less than two weeks after he found himself in hot water for allegedly using a foreign substance against the Red Sox at Yankee Stadium.

?It?s just a shame. It?s bad for the game. And like I said, it takes away from John Lackey. We?re talking about a guy that got ejected in the second inning instead of talking about the performance of John Lackey, which is a shame.?

Certainly, the headlines will center on Pineda because it?s not every day you see an athlete push the proverbial envelope with such carelessness. But once everyone washes their hands clean of pine tar-gate, they?ll notice Lackey came out of Wednesday smelling like a rose. 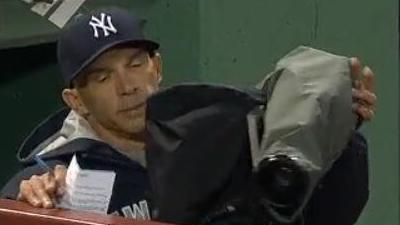 Joe Girardi Has Beef With ESPN Camera; Other Notes From Red Sox’s Win