Boston Red Sox first baseman Mike Napoli will be evaluated on a day-to-day basis after dislocating his finger while sliding headfirst into second base in the ninth inning of Tuesday night’s 2-1 loss to the Chicago White Sox at U.S. Cellular Field.

Napoli jammed his finger as he dove headfirst into second base after advancing on a wild pitch from Chicago reliever Donnie Veal. The incident left Napoli’s left ring finger sticking out an an unnatural angle. X-rays of Napoli’s finger indicated there was no fracture.

“It’s not broke,” Napoli said. “I can play with some soreness. I guess we’ll see how it goes (Wednesday).”

Red Sox manager John Farrell reiterated that the team is treating Napoli’s availability on a day-to-day basis, adding the first baseman to the growing list of Boston players struggling with injuries early in the season.

“It’s not bad,” Napoli said. “It just stinks that guys are going down. It’s part of baseball. You have to keep going, and guys have to step in. Luckily, it’s not bad.”

Check out a photo of Napoli’s dislocated finger below, and keep scrolling to see video of the play. 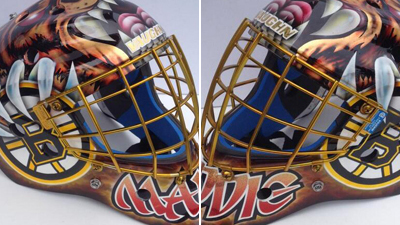