Eastern Illinois’ Jimmy Garoppolo came to Foxboro to meet with the Patriots earlier in the week, ESPN.com’s Mike Reiss reported Wednesday. The FCS product is projected as a second- or third-round pick in the 2014 NFL draft by The Sports Xchange, though some analysts have him pegged for the first round. The Patriots hold the 29th overall pick in the draft.

Garoppolo won the 2013 Walter Payton Award, given out to the most outstanding offensive player in the FCS.

The Patriots also have met with top quarterbacks Teddy Bridgewater, Johnny Manziel, Blake Bortles and AJ McCarron during the pre-draft process. Tom Brady is entering his 15th season in the league, while backup Ryan Mallett is in a contract year. 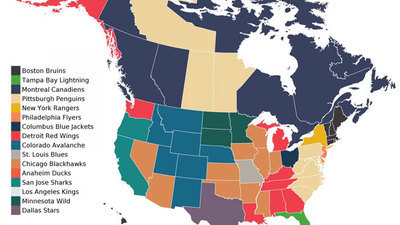 Facebook Figures Out Which NHL Team Each State Supports (Photo)