We’ve come a long way from the single-bar helmet.

Riddell Sports has created a new, space-age-looking football helmet dubbed the “SpeedFlex,” which supposedly is designed to alleviate impact on a player’s skull and reduce concussions, according to a report from ESPN’s “Uni Watch.”

Riddell hasn’t officially put its new helmet on the market, but early versions of the SpeedFlex have found their way to several Division I college football programs, including Texas and Iowa State, which tweeted out pictures of the futuristic lids.

Perhaps the strangest new feature is a flexible “hinge panel” on the crown of the helmet that actually bends when you push on it:

According to Riddell senior vice president Thad Ide, this hinge panel is designed to “improve the impact response of the helmet by adding some selected flexibility to the shell.”

Football fans around the country likely will catch a glimpse of the strange-looking helmets in action this fall, as both NFL and Division I college football teams have expressed interest in using the SpeedFlex for the 2014 season.

At least they’ll be easy to spot. 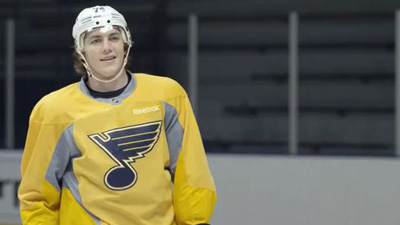