Vote: What's Your Take On The NBA's Punishment Of Donald Sterling? - NESN.com Skip to content NBA Commissioner Adam Silver faced his first major test as the head of the Association when audio of Donald Sterling’s racist comments was released over the weekend.

After promising to give Sterling due process in the league’s investigation of the leaked conversation, Silver came down hard on the Clippers owner, imposing a lifetime ban and fining him $2.5 million. Additionally, Silver pledged to work with the other 29 owners and take the necessary steps to force Sterling to sell the team.

The Sterling scandal has rocked the sports world throughout the past three days, but Silver stuck to his word and acted quickly. His punishment is the harshest ever issued by the league, and it is among the stiffest ever given to an owner in any professional sport. 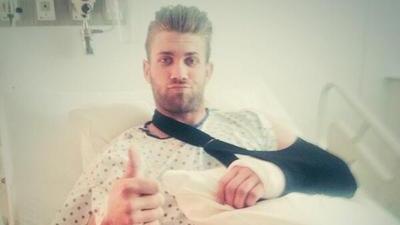 Bryce Harper Tweets Picture Of Himself After Successful Surgery (Photo)