It’s been a long wait to see who the New England Patriots will add in this year’s draft, and while there’s a chance they could trade up or down, we have them staying put at No. 29 overall in NESN.com’s latest mock draft.

The Patriots have needs all over their roster, including defensive tackle, where Vince Wilfork and Tommy Kelly are both returning from season-ending injuries. The Patriots had little depth in 2013 at the position, and they should be grooming a new starter for the future.

A quarterback isn’t worthy of the No. 1 overall pick, but if the Texans can find a trade partner, they could take a signal-caller later in the first round. If they can’t, they can “settle” for Clowney

The Rams are another team that could look to trade down. They need offensive line help more than another pass rusher, though, so they should pick Robinson over Khalil Mack.

Mack won’t drop too far. The Jaguars need pass-rushing help, and Mack can serve as a Von Miller clone.

The draft is a week away, and there’s still no telling which quarterback will come off the board first. The Browns’ ownership likely will be pushing hard for Manziel.

The Raiders added everything in free agency other than a top-flight wideout. Watkins can help Matt Schaub, whom the Raiders traded for, and the quarterback they should draft in the second round.

Teams reportedly like Lewan more than Jake Matthews. The Falcons definitely should add a tackle in the first round.

The Buccaneers added Anthony Collins in free agency, but if they want a franchise left tackle, Matthews or Lewan likely will be available.

Bortles would benefit from sitting for a year, and the Vikings have Matt Cassel to start in 2014. Bortles has been compared to poor man’s Andrew Luck.

The Bills don’t necessarily need a wide receiver, but Evans should be too good to pass up. The Bills also could look to add offensive tackle Zack Martin here.

Clinton-Dix is widely considered the best defensive back in the draft, and the Lions need help in the back end of their defense.

The Titans would have a dominant front four if they paired Donald with Jurrell Casey at defensive tackle. Donald and Casey could have 20 combined sacks.

Beckham should be flying up draft boards. He doesn’t have ideal size, but he immediately would be the Rams’ best receiver.

The Bears’ defense was in shambles in 2013. They need help improving the entire unit, and a great linebacker is a nice place to start.

A cornerback could go higher, but it might not be Gilbert. The Oklahoma State corner, Kyle Fuller and Darqueze Dennard all are ranked around the same area.

Hageman is one of the riskier first-round prospects, and his effort has been questioned, but he has the size and athleticism to be a star in the NFL.

The Ravens need another pass catcher, whether it’s at tight end or wide receiver. They could look to trade out of this spot, but if Ebron is available, they could be tempted to take him.

The Dolphins’ linebackers are on the older and slower side. Shazier can inject some youth and speed into that unit. His father is the Dolphins’ chaplain.

Cardinals head coach Bruce Arians typically likes quarterbacks with big arms. Carr might have the strongest arm in the draft. The Cardinals could be fine with Carson Palmer under center for one more year, then Carr can take over.

Pryor isn’t a prototypical free safety because of a lack of speed, but he filled the role well for Louisville.

The Eagles could use a pure 3-4 outside linebacker, and Barr has the potential to fill that role. He can start off as an edge rusher, then the Eagles can teach him to drop back into coverage.

The Chiefs needed another receiver even before Dexter McCluster left for the Titans. Cooks can play in the slot or in the “Z” position.

The Bengals have Margus Hunt to take over for Michael Johnson, and they could use an improvement over Domata Peko at nose tackle.

The Chargers need a cornerback and Dennard is the best defensive back left on the board. He’s the cousin of Patriots cornerback Alfonzo Dennard.

The Browns passed on Watkins to take Manziel at No. 4 overall. Lee can pair with Josh Gordon for an imposing set of receivers.

The Saints added Champ Bailey in the offseason, but they could still use more youth at cornerback. Roby has a high ceiling and low floor.

Jordan Gross, the Panthers’ starting left tackle in 2013, retired after the season. The Panthers also need a receiver, but they can find one in the second round.

The Patriots need a versatile defensive tackle who can rush the passer. Easley tore ACLs in both knees during his career at Florida, but the Patriots have shown a lot of interest in him. The Patriots’ Super Bowl-winning teams were built by drafting defensive tackles in the first round. Easley is more Ty Warren than Vince Wilfork or Richard Seymour.

There’s are a lot of question marks at outside linebacker for the 49ers after Aldon Smith’s latest arrest. Ford has the agility to drop back into coverage and rush the passer from linebacker.

The Broncos lost Zane Beadles in free agency, and Su’a-Filo could immediately serve as a replacement.

The Seahawks need help at tackle and guard, and Bitonio can play both roles. He could start at right tackle from Day 1 and serve as insurance in case left tackle Russell Okung goes down with injury again.

Bridgewater has a little Tom Brady in him, which should be appealing to head coach Bill O’Brien.

Kouandijo could fall out of the first round because of a bum knee, but he should be good enough to start at right tackle for the Redskins.

The Browns need help at linebacker, and Van Noy is the best available on the board. He can rush from the outside, and he has the speed and agility to drop back into coverage. He could play inside or outside linebacker for Cleveland.

Garoppolo is jumping up draft boards, and the Raiders need a future franchise quarterback.

The Falcons will be lucky if Ealy is still available in the second round. They need a pass rusher.

Benjamin and Vincent Jackson would be twin towers at wide receiver for the Buccaneers.

The Jaguars get stuck with Savage after waiting until the second round to take a quarterback. He has potential with a big arm, but he’s a risk. If the Jaguars want to play it safe, they could draft Alabama’s AJ McCarron.

Verrett could drop into the second round since he’s small and projects as a slot cornerback. He might be the most talented corner in the draft, however.

The Bills lost starting safety Jairus Byrd in free agency. Ward could wind up being a similar player in the NFL.

The Titans need a running back after releasing Chris Johnson. Hyde is the best back in this class.

Jernigan is the best player available, and that’s how the Giants draft.

The Rams need talented players all over their defense. Tuitt can contribute against the run and pass.

The Lions need another cornerback and Joyner is the best player left at the position.

Amaro can serve as a flex tight end/slot receiver for the Steelers, who desperately need pass catchers.

The Cowboys released DeMarcus Ware, and Anthony Spencer might not come back from injury as the same player.

The Ravens added a tight end in the first round, but they still have a need at wide receiver.

Adams would fit well across from Eric Decker in the Jets’ offense. They need better offensive weapons for whoever they decide to start at quarterback.

The Dolphins are desperate for offensive line help, and James can start at right tackle from Day 1.

The Bears added Jared Allen and Justin Houston, but they could use some youth at pass rusher.

The Cardinals need a free safety, and Bucannon might be the most natural player at that position in this year’s class.

Jermichael Finley is still unsigned after suffering a spinal injury in 2013. Seferian-Jenkins is athletic and an experienced blocker.

The Eagles still have Jeremy Maclin and Riley Cooper after releasing DeSean Jackson, but they could use a receiver with the size and athleticism of Robinson.

The Bengals could use a pure edge rusher, and Attaochu would provide a spark on third down.

The Chargers found a winner in Keenan Allen last year. Bryant has similar size, but can add a vertical threat with his impressive speed.

Sankey could start out as a third-down option for the Saints, but he showed at Washington that he can be a work horse back, as well.

The Colts need help along their interior offensive line. Richburg is the best center in the draft.

Landry ran a 4.77-second 40-yard dash at the NFL Scouting Combine, which is concerning, but he was highly productive at LSU.

The 49ers are a little shallow at cornerback, and they’ve learned from playing the Seahawks that some size at cornerback can be valuable. Desir comes from a small school, but he’s 6-foot-1 and talented.

The Patriots will be lucky if Niklas is still around at No. 62 overall. He’s raw and new to the position, but he showed tremendous upside at Notre Dame. He’s one of the best blocking tight ends in the draft.

Bradford served as an edge rusher at Arizona State, but he could play outside linebacker in the Broncos’ 4-3. 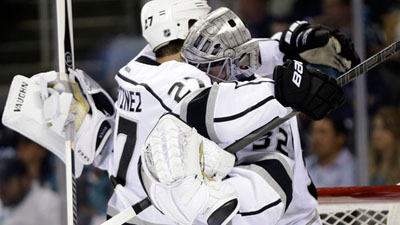