The U.S. soccer community doesn’t need vice president Joe Biden to tell us how big a deal Copa America 2016 will be, as it speaks for itself.

CONCACAF and  CONMEBOL, the governing bodies of soccer in North and Central America and the Caribbean and South America respectively, announced in a statement Thursday that the United States will host a special edition of the Copa America in 2016.

The national teams of both the U.S. and Mexico, as well as four other (yet-to-be-determined) CONCACAF teams,  will compete against 10 from South American in a once-in-a-generation soccer spectacle known as the “Copa America Centenario” or “Copa America at 100.”

The pan-American Copa America should captivate fans in the Western Hemisphere and beyond, as the likes of Lionel Messi, Neymar and Radamel Falcao strut their stuff in games that count. Plenty of fans of South American soccer (clubs and countries) already live in the United States. Add the rabid, stateside fan bases of both Team USA and El Tri, travelling fans and other assorted aficionados to the mix, and it’s a safe bet that the 2016 Copa America will be a hot ticket from coast to coast.

The special-edition Copa America will run from June 3 to 26, overlapping with just over half of UEFA Euro 2016 (which starts on June 10 and ends July 10).

The scheduling of the 2016 Copa America is a statement of intent from North and South American officials. They’re ready to compete with European countries (and clubs) for the hearts, minds, eyeballs and dollars of soccer fans in the U.S. and around the world. Naturally, television and sponsorship dollars follow fans’ preferences. Copa America 2016 could unite disparate factions of soccer fans in America, launch U.S. soccer’s second great awakening and change the soccer world forever.

America loves big events, and Copa America 2016 will be the biggest soccer show on U.S. soil since the 1999 FIFA Women’s World Cup. The pan-American championship, followed by the last eight of Euro 2016, will gel into one “summer of soccer” that will keep existing fans in America glued to their screens and create new ones — just as the 2014 FIFA World Cup will do this summer.

Watching Team USA and El Tri take on (part of) the world creates iconic moments and lasting memories. The same goes for clubs. It’s only a matter of time before televised soccer reaches a tipping point in wider American sports culture. When the television dollars from U.S.-based English-language networks start pouring into the coffers of national soccer federations and clubs closer to home, the power and prestige of these teams will grow exponentially. It’s bound to create a new bull market or economic boom town in the soccer world.

Once it happens, those who lay in the CONCACAF and CONMEBOL tents must continue to both cooperate and compete with each other. This can take the form of newly integrated competitions or some other expression of hemispheric solidarity.

One day, players, fans, broadcasters and sponsors in the Western Hemisphere will look to the north, south and within for glory and fufillment — instead of gazing across the Atlantic Ocean. Copa America 2016 could spark a process that leads to the creation of a third pole — a North American one — in the eternal international contest for power, resources and, of course, goals.

Read about the special-edition Copa America in 2016 >> 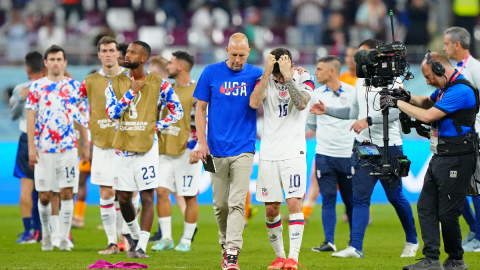