BOSTON — Brock Holt has given the Red Sox much-needed offense from the leadoff spot, and it’s been a huge factor in the team’s season-high four-game win streak.

The 25-year-old third baseman collected three hits in Thursday’s 4-3 comeback win over the Atlanta Braves at Fenway Park. He also picked up an RBI, scored a run and reached base four times.

In fact, Holt started Boston’s comeback in the eighth inning. He led off with a single to left field and took advantage of an error by Braves outfielder Justin Upton by taking second base. He then scored on a single by Xander Bogaerts, which trimmed Atlanta’s lead to 3-2.

Holt has 15 hits in his last 10 games, including five doubles and seven runs scored in that span. He’s hitting an astounding .429 against left-handed pitching and has reached base safely in nine of his last 10 games.

The offseason departure of Jacoby Ellsbury has forced Red Sox manager John Farrell to try different players in the leadoff role this season. No player has enjoyed more success in this spot than Holt. He’s making a strong case to remain in the lineup long-term, even when Stephen Drew reaches the major-league roster.

Here are some notes from Boston’s win on Thursday:

–The walk-off win is Boston’s third of the season and first since May 6 against the Cincinnati Reds. The Red Sox’s four-game win streak is their longest since September 2013.

–Ryan Lavarnway was taken out of the game in the fifth inning due to left wrist soreness. Farrell said he will get an MRI on Friday morning.

–Farrell confirmed that Rubby De La Rosa will start Saturday’s game against the Tampa Bay Rays in place of Felix Doubront, who’s currently on the disabled list. Farrell said that “the recommendation from the staff in Pawtucket” went into this decision. “The last three starts for Ruby have been strong, and that was pretty much the deciding factor,” he added.

–David Ortiz was scratched from Thursday’s lineup as a precaution. He’s dealing with tightness in his right calf. Farrell said before the game that the decision was “more about managing the situation,” and that Ortiz should be back Friday. However, Ortiz did pinch hit in the eighth inning for Daniel Nava and was intentionally walked.

–Jake Peavy pitched well for the Red Sox, giving up three earned runs and striking out four through eight innings. Unfortunately for the veteran, the offense didn’t wake up until the bottom of the eighth inning. He picked up a no-decision as a result and hasn’t won a game since April 25. Thursday’s performance was Peavy’s seventh quality start in his last 11 outings this season.

–Boston improved its record versus left-handed pitchers to 11-7.

–Dustin Pedroia extended his on-base streak to 18 games. He went 1-for-4.

–The Braves have won two of their last 11 road games and their 10 road wins are the fewest among division leaders.

–Braves outfielder Jason Heyward hit his fifth home run of the season. He’s collected a hit in 15 of his last 17 games. 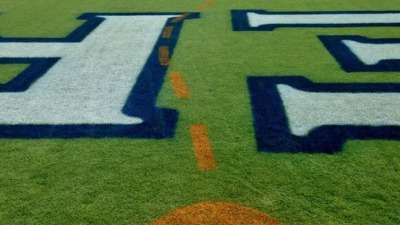