What happened in Vegas this past weekend, certainly did not stay in Vegas.

While Johnny Manziel and Rob Gronkowski were enjoying Memorial Day Weekend by bro-ing out poolside in Sin City, rapper T.I. and Floyd Mayweather were engaging in a brawl at a Fatburger on the Las Vegas strip.

The undefeated boxer exchanged some words with T.I. before the situation escalated and both punches and chairs were thrown. According to TMZ’s sources, T.I. approached Mayweather while he was enjoying a burger early Sunday morning and took a swing at him, prompting the all-out brawl to ensue.

Mayweather shed some light on the shenanigans the next day, explaining that T.I.’s wife, Tiny, was at the center of the mess. T.I. was reportedly jealous of a picture that his wife had posted with Mayweather back in early May. Then, Tiny posted another picture on Instagram, this time with Mayweather’s daughter this past weekend, and it led to the confrontation.

?I?m eating at Fatburger and next thing you know, he walk in talking about we need to talk again,? Mayweather stated. ?Then a couple of words exchange and people got to pushing and a riot kinda broke out. And then a bunch of chaos and that was basically it.?

Cops reported one minor injury and an uncooperative witness at the scene.

Video of the fight can be seen here, but be warned, it does contain explicit language. 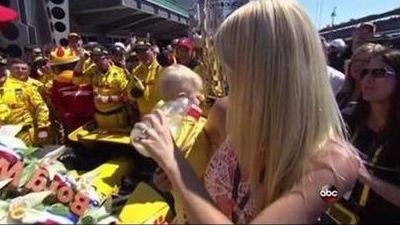 Ryan Hunter-Reay Wins Indy 500; Son Wants Nothing To Do With Milk (Video)