BOSTON — Johnny Damon could never hit quite like Manny Ramirez, but when the former Boston Red Sox teammates reconvened Wednesday at Fenway Park, at least Damon wasn’t rocking whatever that thing was that Ramirez had on his head.

Damon and Ramirez were back, along with the majority of the 2004 Red Sox, to celebrate the team that won the World Series and ended an 86-year championship drought. Despite the slugger’s ugly exit from Boston in 2008, the mere mention of Ramirez brought a smile to the face of every alum in attendance.

Not surprisingly, the infamous diving outfield cutoff play — which Damon had some fun with during Ramirez’s ceremonial first pitch — received its share of mentions.

“My reaction was, why wasn’t he backing me up by the wall instead of hanging out where the shortstop would be?” Damon said. “I tried to relive that moment when we were together in Tampa Bay for a little bit, but he really didn’t want to.

“I was like, ‘Hey, Manny, I was the one who took the brunt of the heat because you cut it off.’ It would have been a one, maybe two-hopper, going to third base. I know I wasn’t blessed with the strongest arm, but I was always accurate, and that throw was going to be accurate also. It’s something we’re always going to laugh about throughout the years.”

The cutoff play has been replayed so many times, it’s almost become cliche. But Trot Nixon remembered a separate, less-often cited instance of Manny Being Manny, that nearly brought him to tears on the field during Game 1 of the World Series.

“He went to make a catch in left field,” Nixon said. “He kind of dove, but he didn’t dive headfirst. He kind of led with his feet, and his knee hit the ground, and dug up a huge trench in left field. It’s like when your knee jams into the ground, but he just kept going. This huge flap of grass was up, he made an error, runs were scored. I don’t remember what the score was.

“This was a World Series game, and I looked at Johnny and I was dying laughing. Johnny was covering his mouth with his glove. (Kevin) Millar was doing the same thing. It was just one after another, everybody just dying laughing. It didn’t faze us — definitely didn’t faze him. He just got up, went back to his position like nothing happened.

“And we were all yelling: ‘At least replace your divot!'” 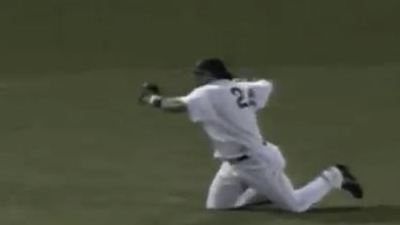 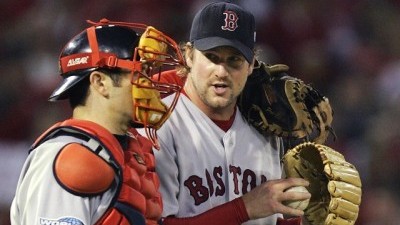