The New England Patriots still have quarterback Tom Brady, but the old adage “defense wins championships” might ring true in 2014.

The Patriots’ defense looked poised for a bounce-back season before the injury bug terrorized the unit in 2013. Most of the pieces that the Patriots lost in 2013 — including linebacker Jerod Mayo and defensive tackle Vince Wilfork — should be back this season, plus the team added cornerbacks Darrelle Revis and Brandon Browner and defensive tackle Dominique Easley.

The Patriots could have one of the NFL’s best defenses if young players like defensive back Logan Ryan, linebackers Jamie Collins and Dont’a Hightower and defensive end Chandler Jones make their expected strides.

The Patriots didn’t add an elite weapon to Brady’s supply, but they might not need one to find success in 2014 if the defense is as good as it looks on paper.

Check out this week’s mailbag for more on how the Patriots improved this offseason.

@DougKyedNESN where you shocked/surprised that the Patriots did not draft any of the Top mentioned Tight Ends in the Draft ?
–@Diilated

It was surprising to see the Patriots ignore their need for a tight end in the draft, but that unfortunately is how the draft board fell. The Patriots would have had to reach for Austin Seferian-Jenkins, Jace Amaro or Troy Niklas at No. 29, trade up from No. 62 overall, or reach for C.J. Fiedorowicz in the second round.

The Patriots were better off waiting until the undrafted free-agent signing period to add to the position once the top five players — including first-rounder Eric Ebron — were off the board.

The tight end draft class was top heavy but ultimately very shallow. Teams were reaching for tight ends throughout the draft, and the Patriots were better off hanging back to select the best available players.

@DougKyedNESN Do the UDFA TE’s rate better than Sudfield, and why was Beck let go so quickly?
–@Silentbrew

Sudfeld certainly was more productive in college than this year’s undrafted free-agent crop, Justin Jones and Asa Watson. We don’t know whether Jones and Watson are better than Sudfeld until they actually are on the field, though.

Sudfeld looked great in OTAs, minicamp and at the start of training camp, but he appeared to lose confidence along the way, and he really struggled once the season began.

It will be important to keep expectations in check for Jones and Watson. Signing Dustin Keller would help take pressure off of Jones and Watson, but the veteran’s knee has to be cleared first.

It’s unclear why Tyler Beck was cut so quickly, though my best guess is that it might have had to do with something in his medical history.

I’d give it a solid “B” at first glance. Obviously it takes time to see how a draft class actually shakes out. The Patriots failed to address needs at tight end and linebacker, but they stocked up on those positions in rookie free agency.

Defensive tackle Dominique Easley and running back James White both have a chance to contribute right away, and either Bryan Stork or Jon Halapio could emerge as starters in 2014. The Patriots needed depth in the draft, and they filled that with versatile defensive linemen, offensive linemen, a quarterback, running back, defensive back and wide receiver.

I thought the Jimmy Garoppolo pick was especially savvy. Garoppolo could wind up being a steal at No. 62 overall, and so far, he seems like a perfect fit for the Patriots both mentally and physically.

@DougKyedNESN With the new press man corners and quick linemen, do you think Bill is trying to go for a more aggressive defense this season?
–@AverageJoe1993

The Patriots are in perfect position to run a more aggressive defense. The signing of Darrelle Revis alone should allow the Patriots to blitz more or stack the line against the run without having to worry about the back end of the field. Having free safety Devin McCourty back deep gives the Patriots some insurance, as well. His combination of speed and instincts makes him one of the better Cover 1 safeties in the NFL.

The Patriots have one of the best secondaries in the NFL now, and if Logan Ryan proves to be a capable safety, it should be filled with playmakers. The addition of Easley and the possibility of allowing Jamie Collins and Dont’a Hightower to blitz more should mean more opportunities for Chandler Jones and Rob Ninkovich to accumulate sacks. Defensive tackle Tommy Kelly was a force up the middle before he tore his ACL last season, and if he’s able to come back at full health, the Patriots could have a dangerous, and aggressive, pass defense.

@DougKyedNESN which running back will handle most of the carries?
–@GerryBelmosto

The smart money is on Stevan Ridley, since the Patriots didn’t sign or draft a workhorse-type running back. James White is more of a third-down option — though he’s capable of playing on first and second down — and it probably is not smart to put too much stock in undrafted free agent Stephen Houston or futures signing Jonas Gray, though they could be contributors in the future.

It’s pretty surprising to see head coach Bill Belichick put so much on Ridley’s shoulders heading into the 2014 season. He lost his starting role in 2014 for fumbling, and if those issues pop up again, there isn’t an obvious backup.

Shane Vereen probably could handle every-down duties, but the Patriots haven’t shown a willingness to allow him to serve that role in the past. Ridley likely will get the most touches, but Vereen shouldn’t be too far behind — as long as he stays healthy. 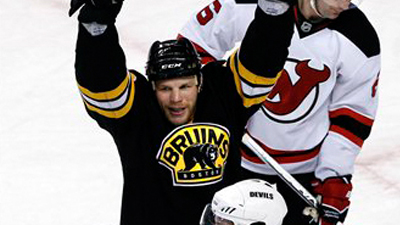 Shawn Thornton Unsure Of Future, But Will Call Boston Home After Career