Final, Rangers 8-0: Yu Darvish came up just short in his bid for a no-hitter, but the right-hander’s one-hit gem paved the way for an 8-0 Rangers win in Arlington.

David Ortiz broke up Darvish’s no-hitter with two outs in the ninth inning. The slugger beat the shift with a single into right field.

Darvish, who walked two, lost his perfect game with two outs in the seventh inning. Ortiz hit a popup into shallow right field that second baseman Rougned Odor and right fielder Alex Rios converged on. It looked like it was going to be another routine out, but the ball dropped. The official scorer ruled the play an error on Rios, although it wouldn’t be surprising if it eventually gets changed to a hit.

Darvish struck out 12 in his winning effort. Clay Buchholz, meanwhile, struggled, surrendering six earned runs on 10 hits over 4 1/3 innings. Buchholz struck out three and walked two while suffering the loss.

For what it’s worth, the Red Sox never have had a perfect game thrown against them. The last no-hitter against the Red Sox came from the Seattle Mariners’ Chris Bosio on April 22, 1993.

David Ortiz beat the shift with two outs in the ninth inning. His single marked Boston’s first hit of the game.

Darvish now exits after 8 2/3 innings of one-hit ball. Alexi Ogando will look to put the finishing touches on this one.

More importantly, Yu Darvish now heads to the mound looking to complete a no-hitter. Dustin Pedroia, Shane Victorino and David Ortiz are due up in the ninth inning for the Red Sox.

Mid 8th, Rangers 8-0: Yu Darvish will carry a no-hitter into the ninth inning in Arlington.

Darvish issued a leadoff walk to Xander Bogaerts in the eighth inning but settled down to record three straight outs.

A.J. Pierzynski grounded out, Will Middlebrooks popped out and Jackie Bradley Jr. struck out swinging.

The Red Sox have had three baserunners — two walks and an error — but haven’t been able to produce a single hit. Darvish has struck out 11 hitters along the way.

Darvish will face the top of the Red Sox’s order — Dustin Pedroia, Shane Victorino and David Ortiz — in the ninth inning. The right-hander has thrown 113 pitches thus far.

Alex Rios, Mitch Moreland and J.P. Arencibia went down in order in the seventh.

Rios and Moreland flied out to right field and center field, respectively. Arencibia struck out swinging.

Yu Darvish heads to the mound in the eighth inning six outs shy of a no-hitter. He has thrown 97 pitches thus far.

Mid 7th, Rangers 8-0: All eyes were fixated on the game’s official scorer following a strange play in the seventh inning.

Yu Darvish, who was working on a perfect game, recorded two quick outs in the seventh. Dustin Pedroia flied out to center field and Shane Victorino grounded to first base.

Then, Darvish lost his perfect game.

David Ortiz hit a sky-high popup into shallow right field. Second baseman Rougned Odor raced out and right fielder Alex Rios charged in, but the ball dropped in between the two players, forcing the official scorer to make a tough call as to whether the play should be ruled a hit or an error.

The ball didn’t touch either player’s glove, but an error eventually was charged to Rios, meaning Darvish still has a no-hitter intact despite losing his perfect game. Darvish walked Mike Napoli before retiring Grady Sizemore to end the inning.

Elvis Andrus doubled after Shin-Soo Choo led off with a line drive to left field handled by Grady Sizemore.

Capuano, who was touched up in the fifth inning, settled down to strike out Adrian Beltre and Prince Fielder. Both Beltre and Fielder went down looking.

Darvish is perfect through six innings. He struck out Jackie Bradley Jr. to finish the sixth, giving him a season-high 10 strikeouts.

A.J. Pierzynski grounded out and Will Middlebrooks popped out into foul territory before Bradley’s inning-ending K.

End 5th, Rangers 8-0: Yu Darvish has received plenty of run support, as the Rangers struck for five runs in the fifth inning while knocking Clay Buchholz from the game.

The Red Sox called upon Chris Capuano in the fifth after three of the first four hitters Buchholz faced reached base. Elvis Andrus led off with a single and Prince Fielder worked a one-out walk before Alex Rios made it 4-0 with an RBI single into center field.

Capuano, who has been solid this season, hardly provided relief. The left-hander was charged with a balk while facing his first hitter of the night, and that set the tone for what was to come.

Mitch Moreland made it 5-0 with an RBI single, and J.P. Arencibia made it 6-0 with a sacrifice fly to left-center field that Grady Sizemore caught on the edge of the warning track before banging into the wall.

Leonys Martin extended Texas’ lead to 8-0 by hooking a line drive over the right field fence. It was Martin’s second home run of the season.

Mid 5th, Rangers 3-0: The Red Sox have yet to produce a baserunner.

Yu Darvish worked another 1-2-3 inning in the fifth. He struck out Mike Napoli to begin the inning, giving him nine K’s for the game.

Grady Sizemore flied out to left field and Xander Bogaerts grounded out to second base.

Leonys Martin led off with a single. He was thrown out trying to steal, as Pierzynski delivered a strike and Xander Bogaerts slapped down a quick tag.

Bogaerts was spiked in the knee and briefly was shaken up, though the shortstop remained in the game after testing his leg with some light jogging in the outfield.

Rougned Odor collected his first career major league hit with one out. The 20-year-old was thrown out trying to steal second base with two outs and Elvis Andrus batting.

Darvish struck out two more in the fourth inning, giving him nine K’s in the game. Dustin Pedroia foul tipped a slider into the catcher’s mitt. Shane Victorino came up empty on a slider.

David Ortiz ended the inning with a high fly ball to left field.

End 3rd, Rangers 3-0: Clay Buchholz labored through the third inning, in which the Rangers struck for two runs.

Shin-Soo Choo led off with a seven-pitch walk. It was exactly the type of at-bat the Rangers anticipated seeing on a regular basis upon singing Choo to a monster contract over the offseason.

Elvis Andrus singled into center field on a play shortstop Xander Bogaerts could have made. Bogaerts slid after ranging up the middle, but the ball bounced over his glove and into center.

Prince Fielder knocked in Texas’ second run with a one-out line drive into left-center field that scored Choo from second base.

Alex Rios made it 3-0 with a fly ball down the right field line that Shane Victorino grabbed in foul territory. Andrus trotted home from third base on the sacrifice fly.

Mitch Moreland added a single before Buchholz finally closed off the inning.

Darvish struck out the side in the third inning, giving him seven strikeouts through three innings.

A.J. Pierzynski, Will Middlebrooks and Jackie Bradley Jr. were victimized by strikeouts in the third.

Pierzynski jumped ahead in the count 3-0 but ultimately went down looking at a 3-2 slider.

Middlebrooks was tardy on an 0-2 fastball that reached 94 mph.

End 2nd, Rangers 1-0: The Rangers have made some good contact in the early going.

Rougned Odor — the Rangers Minor League Player of the Year in 2013 — grounded to second base for an inning-ending forceout.

Mid 2nd, Rangers 1-0: Yu Darvish has retired the first six hitters he has faced. He has struck out half of them.

Mike Napoli and Xander Bogaerts struck out in the second inning. Shane Victorino, of course, fanned in the first inning.

Napoli went down looking and Bogaerts went down swinging.

Grady Sizemore sneaked in a flyout to right field. Alex Rios didn’t get a great jump, but he made a running catch in shallow right.

End 1st, Rangers 1-0: The Rangers hit the ball hard against Clay Buchholz in the first inning.

Elvis Andrus put the wheels in motion with a one-out single into right field after Buchholz struck out Shin-Soo Choo to begin his outing.

Old friend Adrian Beltre put the Rangers on the board with a line drive into the left field corner. Andrus scored all the way from first base as Beltre cruised into second base with a double.

Prince Fielder nearly added to the lead by putting a charge into one toward center field. Fortunately for the Red Sox, Jackie Bradley Jr. got a good jump and raced back to make a leaping catch before banging into the wall.

Beltra took third base on Fielder’s deep flyout, but Alex Rios grounded to short to end the inning.

Mid 1st, 0-0: Yu Darvish started off on the right foot, retiring the Red Sox in order in the first inning.

Dustin Pedroia, Shane Victorino and David Ortiz couldn’t get anything going against the Rangers right-hander.

Victorino chased a 2-2 slider that darted out of the zone.

8:09 p.m.: Dustin Pedroia digs in, and Yu Darvish misses with a first-pitch ball.

7:25 p.m.: The Red Sox have had a difficult time taking down the Rangers recently. Boston’s 16-30 mark against Texas since the beginning of the 2009 season is the club’s worst record against any American League team in that span.

The Red Sox have lost their last five series against the Rangers.

6:40 p.m.: As mentioned, Yu Darvish has faced the Red Sox twice in his young MLB career.

Darvish first faced Boston on Aug. 6, 2012, at Fenway Park. He gave up six earned runs on 11 hits over 6 2/3 innings. Darvish struck out nine and walked four while suffering the loss in that contest.

Darvish then faced the Red Sox again on May 5, 2013, in Texas. He gave up three runs on four hits over seven innings. Darvish struck out 14, walked two and didn’t factor into the decision.

5:55 p.m.: There aren’t any major lineup changes for the Red Sox against Yu Darvish. Shortstop Xander Bogaerts returns after getting the night off Wednesday. He’ll bat sixth behind Grady Sizemore, who is in left field against the right-hander.

5:45 p.m. ET: The Boston Red Sox finally are back to .500 after winning two straight over the Cincinnati Reds at Fenway Park. The Red Sox now will look to assemble their first three-game winning streak of the season against the Texas Rangers at Globe Life Park in Arlington.

Clay Buchholz and Yu Darvish headline an intriguing matchup to kick off this weekend’s three-game series between the Red Sox and Rangers. Buchholz enters with a 5.63 ERA but on the heels of back-to-back wins over the Toronto Blue Jays and Oakland Athletics.

Buchholz enjoyed his best start to date in his last outing against the Blue Jays last Friday. He allowed just one run on three hits over 6 1/3 innings as Boston rolled to a 7-1 victory.

Buchholz and the Red Sox will have their work cut out for them Friday, though, as Darvish is one of the best pitchers in baseball. Darvish, who is in the midst of his third season after an illustrious career in Japan, enters with a 2-1 record and 2.87 ERA, although he’s been somewhat human over his last two outings.

The Red Sox have faced Darvish twice in the past, and the right-hander holds a 5.93 ERA (nine earned runs over 13 2/3 innings) in those two starts — his worst mark against any team in the majors.

Friday’s clash is scheduled to kick off at 8:05 p.m. ET. Tune in on NESN, and keep it right here with NESN.com. 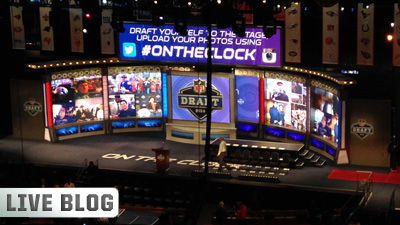