Final, Red Sox 9-4: The Red Sox had their hearts ripped out Tuesday, when Chris Parmelee blasted a walk-off home run off reliever Andrew Miller. Boston responded in a big way Wednesday, controlling the contest from start to finish en route to a 9-2 win in Minnesota.

David Ortiz, who homered twice in Tuesday’s loss, again put on a show. Ortiz launched two more home runs, giving him 11 this season and 442 in his career. Ortiz’s first blast in the third inning gave him 383 as a member of the Red Sox, moving him past Jim Rice and into sole possession of third place on Boston’s all-time home run list.

Ortiz, who now has nine home runs in 13 career games at Target Field, continues to feast on his former team. Big Papi collected three hits in the win.

Grady Sizemore also had a nice night offensively. He went 2-for-4 with a double, a single, a walk and two RBIs.

Felix Doubront found himself in trouble a couple of times but was solid overall. The left-hander worked at a faster pace than we’re accustomed to seeing, and he exited in the seventh inning after 6 1/3 innings of one-run ball. Doubront surrendered seven hits, struck out five and walked one while throwing 104 pitches (71 strikes).

The Red Sox and Twins don’t have much time to ponder this one. The teams will conclude their series Thursday with a matinee showdown featuring Clay Buchholz and Phil Hughes as the probable starters.

Mid 9th, Red Sox 9-2: The Red Sox tacked on two more runs with two outs in the ninth inning. Even the outs were hit hard.

Dustin Pedroia walked, after which manager John Farrell inserted a pinch-runner in Jonathan Herrera with Boston leading by five runs.

Mike Carp, who entered the game as a defensive replacement in the seventh inning, hit a line drive to left field. Eduardo Nunez slid while attempting to make the catch, but the ball clanked off his glove. Nunez was charged with an error.

Edward Mujica will pitch the ninth inning for Boston.

End 8th, Red Sox 7-2: Burke Badenhop should have had another double play in the eighth inning. Instead, the right-hander fired an errant throw into center field, paving the way for Minnesota’s second run.

Badenhop walked Chris Parmelee on seven pitches with one out. Kurt Suzuki then hit a comebacker that had “double play” written all over it, but Badenhop’s throw to second base was way off the mark. Suzuki reached at first base as Parmelee took third.

Xander Bogaerts, Will Middlebrooks and Jackie Bradley Jr. all flied out in the eighth inning.

Burke Badenhop will come back out for the eighth after wiggling the Red Sox out of trouble in the seventh.

End 7th, Red Sox 7-1: Burke Badenhop has done a terrific job this season of coming in and escaping trouble. That’s exactly what he did in the seventh inning.

Felix Doubront was lifted with one out in the seventh after Eduardo Nunez and Aaron Hicks connected for singles.

Badenhop walked Brian Dozier on four pitches to load the bases, but the right-hander induced yet another play to exit the jam unscathed. Joe Mauer grounded to Xander Bogaerts, who stepped on second base and fired to first to complete the inning-ending twin killing.

Badenhop has induced six double plays this season — the most among American League relievers.

The Red Sox made a defensive change before the bottom of the seventh. Mike Carp has entered the game at first base, perhaps simply to give Napoli some rest with Boston leading by six runs.

This marks just the third time in May that Carp has appeared in a game. Carp has started just one game since April 26.

Felix Doubront is back out for the seventh. His longest outing this season is 6 2/3 innings — accomplished on April 13 and April 19.

Parmelee and Pinto grounded to short, and Suzuki popped out to first base.

Dustin Pedroia put an inside-out swing on a 3-2 fastball located in on his hands. The ball squirted out to right field, bringing home Boston’s seventh run.

Pedroia’s RBI single scored Xander Bogaerts. Bogaerts worked a leadoff walk and advanced to second base on a botched double-play attempt by Minnesota. Jackie Bradley Jr. hit a ground ball to third base, and Trevor Plouffe’s throw to second was off the mark, preventing the Twins from recording any outs.

Shane Victorino hit a chopper in front of the mound with runners at the corners. Bradley initially headed home but then tossed on the brakes, at which point pitcher Anthony Swarzak threw to third base. Swarzak’s throw was in the dirt, but Bradley stopped — likely anticipating a rundown — and Plouffe applied the tag.

David Ortiz, who has four home runs over the last two games, struck out swinging to end the inning.

Brian Dozier, Joe Mauer and Trevor Plouffe went down in order against Doubront.

Ortiz’s back-to-back two-homer games make him the first Red Sox player to accomplish the feat since Papi did it July 4 and July 5, 2003.

Kurt Suzuki and Josmil Pinto struck back-to-back singles to begin the fourth. Doubront, like he did after the first three batters reached in the third inning, settled down. This time, he kept Minnesota off the scoreboard completely.

Eduardo Nunez and Eduardo Escobar now share more than just a name. They both flied out to Shane Victorino in right field.

Doubront struck out Aaron Hicks looking to end the inning.

Xander Bogaerts lined a double down the third base line to kick things off, and Will Middlebrooks plated him three pitches later with a single into right field.

It’s always encouraging to see Middlebrooks go the other way with pitches located on the outside corner — exactly what he did in the fourth inning.

Jackie Bradley Jr. made solid contact, but it was right at shortstop Eduardo Escobar for the first out. Dustin Pedroia and Shane Victorino flied out to center field and right field, respectively.

End 3rd, Red Sox 4-1: The Twins jumped on Felix Doubront for a run in the third inning.

Eduardo Escobar led off with a double. Escobar lined a 2-2 pitch into the right-center field gap.

Doubront, to his credit, minimized the damage pretty well, though. Joe Mauer plated Minnesota’s first run with a sacrifice fly, but Doubront made sure that was the only run to cross.

Trevor Plouffe flied out to center field and Chris Parmelee struck out looking to end the threat.

Ortiz crushed a solo homer with two outs in the third inning. It was Ortiz’s 10th home run of the season and his 383rd as a member of the Red Sox. The homer also was Ortiz’s third in the last two days, as Big Papi went yard twice in Tuesday’s loss.

Mike Napoli jumped on the first pitch he saw and planted a double off the right field wall. Grady Sizemore, who knocked in Boston’s second run in the first inning, dropped a single into center field to plate Napoli.

Doubront, who typically works slowly, has sped things up a bit in the early going of this start. The results have been good thus far, as the lefty tossed a 1-2-3 second inning.

Kurt Suzuki, Josmil Pinto and Eduardo Nunez went down in order on three balls put into the air.

Red Sox manager John Farrell said before the game that he’d like to see Doubront and Clay Buchholz begin working faster, so the left-hander’s quick start in Minnesota shouldn’t be too surprising.

“In general, we’d like all of our pitchers to work with an up-tempo approach and yet, it has be individual to each guy, making sure that he’s not rushing through things from a fundamental standpoint and not taking the time needed to execute as consistently as possible,” Farrell said.

Mid 2nd, Red Sox 2-0: A double play prevented the Red Sox from adding to their lead in the second inning.

Xander Bogaerts led off with a single into center field. He was quickly wiped off the bases, though, as Will Middlebrooks grounded to second base, where Brian Dozier began a 4-6-3 double play.

Jackie Bradley Jr. ended the inning with an easy grounder to third base.

End 1st, Red Sox 2-0: Felix Doubront overcame a two-out double to keep the Twins off the scoreboard in the first inning.

Brian Dozier flied out to right field and Joe Mauer grounded to second base, giving Doubront two quick outs. Trevor Plouffe shot a line drive past Shane Victorino and to the wall in right field, though, extending the inning for Tuesday’s hero.

Plouffe took third base on a passed ball charged to A.J. Pierzynski. Doubront responded by striking out Chris Parmelee, who drilled a walk-off home run Tuesday.

Shane Victorino, who entered the game with a .471 average in 19 career plate appearances against Twins starter Kevin Correia, got things started with a single into left field. David Ortiz, who homered twice in Tuesday’s loss, sent Victorino racing for third base by dropping a double into the right-center field gap.

Mike Napoli gave the Red Sox an early 1-0 lead with a hot shot right at second baseman Brian Dozier. Dozier handled the smash cleanly, but Victorino scored from third base on the RBI groundout.

Grady Sizemore made it 2-0 with a double off the wall in right-center field.

8:11 p.m.: Kevin Correia deals a first-pitch strike. The Red Sox and Twins are underway in Minnesota.

7:40 p.m.: It’s good to see Shane Victorino in the lineup for Wednesday’s game. Victorino jammed his knee while sliding into third base in the seventh inning of Tuesday’s game.

David Ross, who rolled an ankle Tuesday during batting practice, isn’t expected to miss any time because of his ailment, Red Sox manager John Farrell told reporters before Wednesday’s game.

An error initially was charged to right fielder Alex Rios after David Ortiz dropped a blooper into right field in the seventh inning of the Red Sox’s loss to the Texas Rangers on Friday. The ruling kept Yu Darvish’s no-hitter intact, though Ortiz later ended the no-hit bid with a ninth-inning single.

MLB reversed the call Wednesday, determining that Ortiz should have been credited with a single — thus ending Darvish’s no-hitter — in the seventh.

6:35 p.m.: There isn’t anything too notable about the Red Sox’s starting lineup. It’s the same lineup that manager John Farrell trotted out for Tuesday’s series opener, with the only exception, of course, being the starting pitcher.

Wednesday’s complete lineups are below.

Doubront has been through some highs and lows this season while looking to build on a 2013 campaign that also was a rollercoaster ride for the young lefty. Doubront has pitched pretty well over his last two starts, though, lowering his ERA from 6.00 on April 24 to its current 5.09 mark.

Doubront, who allowed one earned run on five hits over 5 1/3 innings against the Cincinnati Reds in his last start May 6, was originally scheduled to pitch Tuesday’s series opener in Minnesota. The Red Sox opted to switch Doubront and right-hander Jake Peavy in the rotation, however, to ensure Peavy will start Sunday against the Detroit Tigers, who have feasted on left-handed pitching this season. Peavy allowed six runs on nine hits over 4 1/3 innings Tuesday in his shortest outing of the season.

Kevin Correia will toe the rubber for Minnesota. Correia has made just two career appearances against Boston, with his most recent coming May 9, 2013, when the right-hander allowed three runs on nine hits over 5 1/3 innings.

Wednesday’s first pitch is scheduled for 8:10 p.m. Surely, the Boston Bruins will have a lot of your attention, but don’t forget about the Red Sox. Tune in on NESN, and follow along with NESN.com’s live blog. 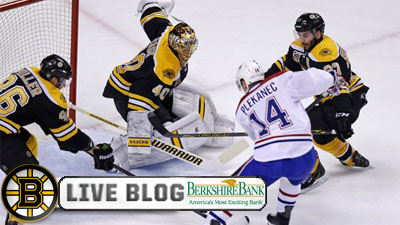