Justin Williams is known as Mr. Game 7, but he’s capable of scoring clutch goals for the Los Angeles Kings early in a playoff series, too.

The 32-year-old forward scored the winning goal in overtime of Game 1 on Wednesday night at Staples Center to give the Kings a 1-0 lead in the 2014 Stanley Cup Final.

Rangers defenseman Dan Girardi tried to clear the puck along the boards, but it was intercepted by Mike Richards, who fed the puck to Williams in the slot. He then shot a perfect wrister that beat Rangers goaltender Henrik Lundqvist blocker side to end the game.

Williams also tallied an assist to bring his playoff scoring total to 20 points (eight goals, 12 assists) in 22 games. He has two goals and three assists in his last three games, including goals in back-to-back contests.

This is the time of the year when the two-time Stanley Cup champion plays at an elite level.

“Justin is the most underrated player on our team by a mile,” Kings defenseman Drew Doughty said postgame. “He doesn’t get enough credit for what he does. There’s two guys on this team I want to get the puck to, and that’s (Williams) and (Anze Kopitar)…He works very hard at both ends of the ice and shows a lot of leadership.”

Williams registered three shots on goal (10 total shots) in Game 1 and played a key role in the Kings’ puck possession game with a 51.9 corsi-for percentage, which allowed his team to dominate the shot attempts at even strength (see chart below). L.A. finished the game with a 43-27 advantage in shot attempts, including a 20-3 edge in the third period. Scoring goals in clutch moments is nothing new for Williams. He’s the NHL’s all-time leader in Game 7 scoring with 14 points in seven career games, including five points (three goals, two assists) in three Game 7s this postseason. He’s tied for the team lead with two game-winning goals and has tallied 11 points in seven elimination games.

He hasn’t fared as well in Games 1-3 with just three points in nine games entering Wednesday night, but with other top-six forwards (including Marian Gaborik and Kopitar) struggling to create scoring chances against the Rangers, Williams took it upon himself to lift the Kings to victory.

“That?s something (Williams has) done throughout his career, obviously,” Kings goaltender Jonathan Quick said after Game 1. “He does it again tonight. I don?t know what more you can say about him. He comes up big at clutch times.” Despite a strong finish to Game 1, Williams knows his team has plenty of room for improvement ahead of Saturday’s Game 2. L.A. had 18 turnovers, didn’t handle the speed of New York’s wingers well and trailed 2-0 in the first period for the second straight game.

“It’s a great result for us, but we have a lot of things to clean up,” Williams said. “It certainly wasn’t a great game by any standards, especially ours. But we were able to get it done, and that’s the most important thing.”

Luckily for the Kings, winning the series opener is usually a sign of good things to come. They are unbeaten in their last six playoff series with a Game 1 victory, and since the NHL went to a Best-of-7 format for the Cup Final in 1939, the winning team in Game 1 has gone on to win the championship 77 percent of the time. 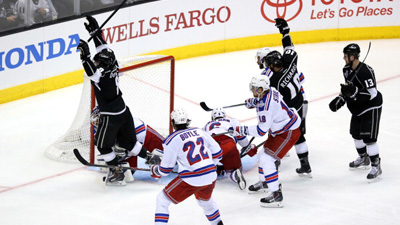