WALTHAM, Mass. — Clint Capela might not speak English very well, but for the moment, he is trying to convince NBA teams he is fluent in the language of basketball.

The Swiss big man by way of France worked out with the Boston Celtics on Wednesday, joining a mixed crop of prospects at the team’s practice facility. He was modest about how he performed, though he did seem more satisfied with his showing than he was at his previous four workouts.

“I did well,” Capela said. “Not beautiful, just good.”

Of the six players in attendance, just two are realistic NBA prospects. Capela has a body made for finishing alley-oops, at 6-foot-10, 220 pounds. Michigan State’s Adreian Payne is a pro-ready stretch-four, standing 6-10, 245 and coming off a season in which he hit 42 percent of his 3-point attempts.

Although neither Capela nor Payne is without his question marks, both are indicative of the way the game — and the big man position — appears to be headed. Neither is a low-post bruiser. Capela might be best served as a weak-side finisher, while Payne would work best in the pick-and-pop. But as the game becomes faster and more spread out, a traditional, plodding big man is less of a necessity.

Just listen to Payne’s description of what he would add to an NBA team — all of it relating to a wide-open, up-and-down game, not a physical, halfcourt one.

“I think I’ll be able to bring a lot of versatility,” Payne said. “I just try to play with intensity and do anything I can for my team, be able to stretch the court, run the floor, rebound and block shots.”

None of this guarantees Capela or Payne will be NBA starters. Capela is knocked for a surprisingly low motor for someone so raw; preferably, if a player is unpolished, at least he goes full-bore all the time. Payne has the opposite problem. He wants to go hard all game, but a medical condition that leaves him with decreased lung capacity limited the minutes he could play at Michigan State.

They also are slightly older than ideal for their respective situations. Capela is 20, almost two years older than other similarly built European players in this draft. Payne is 23, having played with the likes of Jared Sullinger and Terrence Ross, who already have NBA service time under their belts.

“All I hear is that I’m too old, that I don’t have that much upside,” Payne said. “It doesn’t really matter. When we get on the court, we’ll see who’s got the upside.”

When it comes to the draft, NBA teams often struggle to project the way young players will develop. Maybe Capela will blossom into a shot-blocking, slam-dunking menace; maybe not. Maybe Payne will become a high-energy, defense-stretching terror for more than brief spurts; maybe not.

But where they are starting from aren’t bad spots, considering how much the job description of their position is constantly evolving. They are on the right path, which is more than a lot of hopeful draftees can say. 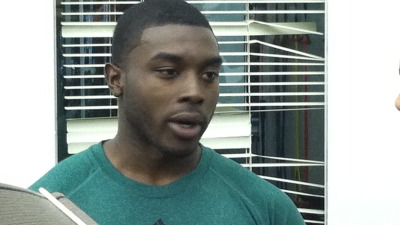