On the surface, that?s the equivalent of saying the sky is blue, the grass is green and the Red Sox won Tuesday?s game against the Minnesota Twins 2-1 at Fenway Park. Yet if you ask anyone in the Red Sox?s clubhouse to describe Holt, that?s likely the first statement you’ll hear.

?The best way to wrap it up, he?s a good baseball player,? Red Sox manager John Farrell said after Tuesday?s game, keeping with the trend. ?And I say that in general, but he understands the game, he?s athletic, he?s got speed, I think he?s improve his basestealing and his overall baserunning from the time we got him here. I think more than anything he?s really flourishing in the flexibility we?re providing for him.?

Calling someone ?a baseball player? is a compliment — a huge one, at that. It implies that person plays with a certain level of passion and grit that not everyone across Major League Baseball possesses. Holt fits the label to a tee, although he incredibly keeps finding new ways to live up to the reputation.

Holt?s season-long journey around the diamond continued Tuesday, with the 26-year-old playing center field for the first time in his professional career. He handled the position admirably, making an instinctive diving catch in the third inning after left fielder Jonny Gomes lost a fly ball in the twilight.

Brian Dozier lifted a fly ball to left field with two outs in the third. Gomes ran in toward shallow left, when, in reality, the ball traveled much deeper. Gomes had no idea where the baseball was located, yet Holt came from out of nowhere and laid out to make an inning-ending grab that helped keep Jon Lester?s rising pitch count reasonable.

?The biggest thing that impresses me is not the catch but the wherewithal for a guy who hasn?t played the outfield a lot, especially center field, to be backing up and moving in that direction when the ball?s hit,? said Lester, who tossed 6 1/3 innings of one-run ball. ?That?s a smart baseball player and, like I said, I think you could put him behind the plate right now and he?d do a pretty good job.?

Holt?s third-inning defensive play created plenty of buzz, but it hardly was his only contribution. Holt, who singled and scored Boston?s first run in the first inning, led off the bottom of the third inning with a double off the Green Monster. He then stole third base and scored the Red Sox?s second run — which proved to be the difference — on Bogaerts? sacrifice fly to right-center field.

?The old saying, ?You make a great catch, you get a great hit,?? Gomes said. ?He led off the (third) inning off with a quick double. It all worked out how I planned it.?

There are so many impressive aspects to Holt?s emergence as a superutility player for the Red Sox. Perhaps most impressive, however, is that he keeps adding new tricks to his arsenal and thriving on the fly.

Oh yeah, and Holt is doing it all with a willingness that only ?baseball players? show. 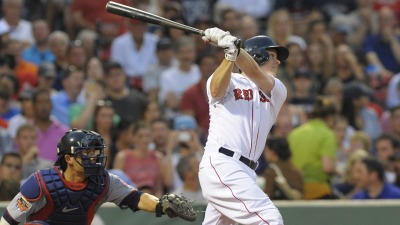