Arizona’s Nick Johnson and Louisville’s Russ Smith headlined a group that was thin on first-round talent, but loaded with players who have local ties. None of the players in attendance is expected to go close to where the Celtics are scheduled to pick at Nos. 6 and 17.

Still, the workout might have given a clue as to what type of player the Celtics could look to add once the draft is complete, as nine of the 12 players were scoring-minded point guards.

Here is a brief look at each player at Monday’s workout.

Bryce Cotton, Providence (PG, 6-foot-1, 165 pounds) — New England hoops junkies know Cotton well for his exploits with the Friars. He averaged 21.8 points per game as a senior and topped 25 points or more in 11 games. He drastically improved his ability to shoot and finish off the dribble during his time in Providence, and though he is still a score-first guard, he did up his assists per game to 5.9 from 2.9 this season.

Kadeem Batts, Providence (PF, 6-9, 245) — Nobody was more thrilled to be here than Batts, who attended Lincoln-Sudbury High School as a freshman and sophomore before moving back to Georgia. His bio on PC’s website lists his favorite team as the Celtics and his favorite player as Paul Pierce. His scoring averaged dropped off as a senior, but he was presented with the Lenny Wilkens Hustle Award after the season.

Chaz Williams, UMass (PG, 5-9, 175) — His intangibles are off the charts, but so is his stature — as in, it doesn’t reach high enough to make it onto the chart. In a workout filled with undersized players who will have difficulty breaking into the two-round draft, Williams was the smallest in attendance. But the diminutive Minuteman possesses point guard skills many of his competitors lack, averaging better than six assists per game in each of his three seasons in Amherst.

Deonte Burton, Nevada (PG, 6-1, 200) — Size is no concern for the burly, athletic Burton, who got to the rim at will for the Wolf Pack and easily led the team in scoring at 20.1 points per game. What might worry NBA evaluators, however, is that Burton never won much in college and seldom showed an interest in getting his teammates involved. Still, his aggressiveness and disruptive wingspan on defense could help him crack the first round.

Nick Johnson, Arizona (SG, 6-3, 200) — The reigning Pac-12 Player of the Year is unlikely to be as involved offensively in the NBA as he was in college, but his athleticism and activity seem certain to make him a pesky on-ball defender, at least. Few players at any position in this draft are as athletic.

Russ Smith, Louisville (SG, 6-1, 160) — That position is not a misprint. Despite being tiny — shorter than a couple of the point guards working out Tuesday and 15 pounds lighter than Williams — Smith is an off-guard at heart. It will be imperative for him to develop some playmaking skills and to bulk up substantially, otherwise he will be eaten alive by pro guards.

Xavier Thames, San Diego State (PG, 6-3, 195) — The leather-tough emotional leader of an Aztecs squad that reached the Sweet 16, Thames has great size for his position and no fear of having the ball in big moments. Whenever SDSU needed a big basket, Thames seemed to deliver one of his mid-range jump shots. He did himself no favors skipping the Portsmouth Invitational, though, and could have some ground to make up in private workouts with teams.

Kendrick Perry, Youngstown State (PG, 6-0, 175) — After “arguably the best career in Youngstown State basketball history,” Perry must prove he wasn’t just a small-school phenom. He was held to 6-for-20 shooting at UMass early in the season, but he did perform against a few major-conference programs, such as his 28 points against Pittsburgh and 20 against St. John’s.

Kyle Casey, Harvard (SF, 6-7, 225) — Casey endured all sorts of taunts this season after sitting out a year for his part in a cheating scandal. There were some predictable dips in production, such as his scoring average falling to 9.7 points per game from 11.4 two seasons ago, and his field goal percentage dropped below 50 percent for the first time in his collegiate career. Yet NBA teams might be intrigued by his 31.8-percent (37 for 116) accuracy from deep over his first three seasons.

Reger Dowell, Texas-Arlington (PG, 6-1, 180) — Dowell’s three years at Oklahoma State, the era that led into the arrival of Marcus Smart, were highly eventful. A teammate was accused of rape, the player ahead of him on the depth chart left school abruptly and a short time later Dowell followed him out the door. After transferring to UTA, Dowell erupted for a career-high 20.3 points per game this season. In a running theme of players at Monday’s workout, however, Dowell has a ways to go in developing as a point guard. He averaged just 2.2 assists per game with the Mavericks.

Semaj Christon, Xavier (PG, 6-3, 190) — Christon might have benefited from gaining more polish at the college level, but physically he is more than ready for the pros. The sophomore averaged 17 points and 4.2 assists this season, following a freshman campaign in which he jumped in and put up 15.2 points and 4.6 assists per game right away. He is not a good enough shooter to play off the ball, however, and his decision-making is not yet strong enough to rely on him at the point.

Tim Frazier, Penn State (PG, 6-1, 170) — Both speedy and deceptively strong for his size, Frazier was a defensive terror for the Nittany Lions. He had the ball in his hands a lot, particularly as a junior, when he was the only player in the nation to average 18 points and six assists per game. Although he averaged a relatively modest 2.6 assists per game, he was prone to coughing up the ball in bunches in odd games. 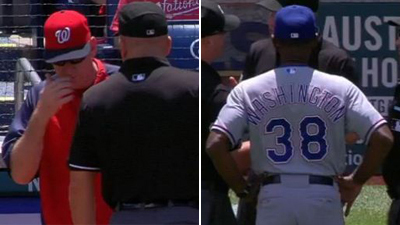 Rangers, Nationals Both Call For Challenge On Same Play (Video)