Bard, who was one of Major League Baseball’s premier setup men from 2009 through 2011 while with the Boston Red Sox, currently is pitching for the Hickory Crawdads, a Single-A affiliate of the Texas Rangers. The 28-year-old allowed four earned runs without recording a single out Sunday against the Lakewood BlueClaws, giving the pitcher a season stat line that’s difficult to comprehend.

Bard’s ERA following Sunday’s appearance is up to 175.50. He has allowed 13 runs in two thirds of an inning over four appearances. Incredibly, however, Bard hasn’t surrendered a single hit.

Bard has faced 18 batters. He has issued nine walks and hit seven batters. In other words, hitters very rarely have had an opportunity to swing the bat. His two outs have come via a strikeout and a comebacker to the mound.

Bard, whose career started to go south when the Red Sox attempted to convert him back into a starting pitcher in 2012, was sidelined for much of last season with an abdominal injury. The right-hander underwent surgery for thoracic outlet syndrome back in January, but he’s still struggling with the same control issues that plagued him before he underwent the procedure.

If Bard continues on the current path, it’s hard to imagine his baseball career lasting much longer, which would be unfortunate given the potential he flashed upon arriving in the majors in Boston. 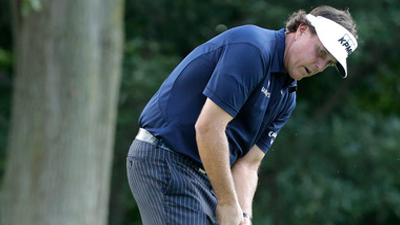 Phil Mickelson’s Putting Woes: Lefty Is A Robot With A Short Circuit