Boston Bruins defenseman Dennis Seidenberg is a strong, rugged player, one who’s tough to play against. He also has two dogs named “Wiggles” and “Bubbles Lollipop.”

That fact came to life early in the Bruins’ 2013-14 season when the team released the “Pucks and Pups” calendar. The calender featured some Bruins posing with dogs. They were wildly popular, and the proceeds of the calendar’s sales went to MSPCA.

Seidenberg was on hand Thursday to present a $30,000 check at the MSPCA-Angell location in Boston, and he explained the unique names of his two dogs.

“My daughters, obviously (came up with the Bubbles Lollipop name),” he told the team’s website.  “At first it was Blueberry because she’s a blue French bulldog, but it ended up being Bubbles Lollipop because it was easier to pronounce. The other one, Wiggles, it was 10 years ago my wife named him Wiggles because he really liked to wiggle his tail.”

Seidenberg also talked about how impressed he was with the efforts of Bruins fans to help give back, which they were able to do by purchasing the calendar. 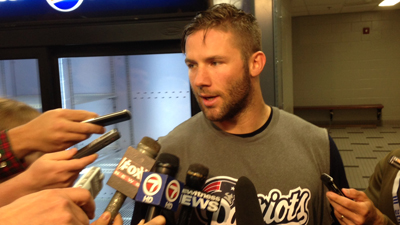