This is hockey at its best and most exciting, and when it’s played like this, there’s not a better sport in the world.

The Kings were on the power play in the game’s final 60 seconds, opening up the ice and leading to scoring chances for both teams. Kings forward Anze Kopitar had a golden chance right in front of the net, but Rangers goalie Henrik Lundqvist made one of his 20 third-period saves. That sprung speedy New York forward Carl Hagelin on a short-handed breakaway, but Jonathan Quick made his biggest save of the night. The puck hung in the air for what seemed like a minute before bouncing in the crease, where the Kings eventually cleared it.

And back and forth they went.

Both goalies came up big, and the final horn sounded with the game still tied at 2. The Kings eventually won in overtime on Justin Williams’ goal, and if these teams can come anywhere close to matching what they showed in that final minute of regulation, this will be a memorable series.

Stick tap to CBS Sports’ Eye on Hockey blog for the video. 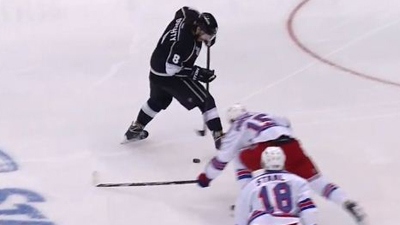