Edelman, who garnered over 87,000 views on his Youtube talk show about, what else, hamburgers, tweaked a Bill Belichick quote when explaining one of his goals for the 2014 season — staying healthy.

“That’s a great objective,” Edelman said Thursday at Gillette Stadium after OTAs about playing all 16 games in 2014. “Being on the field is priority No. 1. Durability is better than ability. You guys know this is a tough game. It?s a grind. Definitely, trying to be on the field for 16 games is on my list.”

Belichick said last year that dependability is better than ability. What better way to be dependable than by staying durable?

Edelman played all 16 games for the first time last season, and it paid off for the veteran receiver. Edelman had his best season in a contract year, catching 105 passes for 1,056 yards and six touchdowns.

Edelman has the comfort of knowing his place on the roster is guaranteed, but he doesn’t have the incentive of approaching a make-or-break season. He said he isn’t approaching 2014 any differently, however, despite signing the four-year, $17 million deal in March.

Edelman will have a chance to improve his game going against an improved secondary during practice. The Patriots signed cornerbacks Darrelle Revis and Brandon Browner over the offseason to add to an already impressive group that included safety Devin McCourty and cornerbacks Logan Ryan and Alfonzo Dennard.

“I mean, you go out there, and you?re playing against premier corners, and you had premier corners last year and adding the new guys, it?s good,” Edelman said. “It?s gonna make you better. You know if you don?t focus on a fundamental or if you?re gonna be lazy with something that these type of guys will take advantage of that opportunity for them. It?s gonna make me better, and hopefully we?re making them better.”

Edelman was able to have such a productive season because, for much of the season, he was the only receiver that quarterback Tom Brady could rely on. If the Patriots’ offense is going to improve in 2014, Edelman’s numbers might simultaneously regress.

Edelman is doing his part to help out the new receivers on the Patriots roster.

“He kind of helped me remember some of the codewords putting this route, that route together to make this code work,” newly signed wideout Brandon LaFell said Thursday about Edelman. “The way he ran a route against a certain defense and stuff like that. He’s been helping me out a lot too.”

Edelman has the comfort of a new contract — though he said he’s too frugal to make any big purchases so far — now, in order to help the Patriots win — he has to stay on the field. 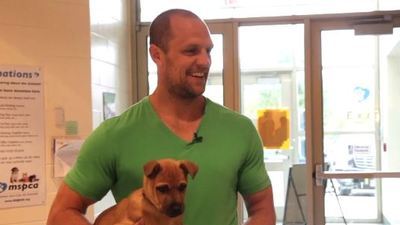