Miroslav Klose didn’t wait long to etch his name into the record books.

The German striker entered Saturday’s 2014 FIFA World Cup Group G matchup against Ghana in the 69th minute and scored just under two minutes later off a corner kick to tie the score at 2-2 and save his team from a critical defeat.

Klose’s clutch goal was also a historic one, as it was his 15th career World Cup goal, tying him with Brazilian legend Ronaldo as the top World Cup goal scorer of all time.

Ronaldo congratulated Klose on his historic achievement Saturday by sending out the following tweet, which translates to “welcome to the club.”

The 36-year-old is competing in his fourth World Cup this year — he scored five goals in his World Cup debut in 2002 — and joins Brazil’s Pele and Germany’s Uwe Seeler as the only players to score in four World Cups.

If breaking a World Cup record isn’t grounds for a backflip celebration, we don’t know what is.

Review our live blog of Germany-Ghana >> 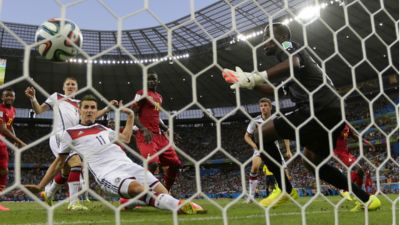