The Patriots quarterback was on fire and outclassed his backup quarterbacks Ryan Mallett and Jimmy Garoppolo, both of whom missed one practice available to the media.

OTAs are not the time to overreact to anything positive or panic when a player come out of the gate a little slow, but there were a handful of players that stood out over the three practices (when our eyes weren’t buried in binoculars trying to locate players, since they were in T-shirts and shorts), and those are the Patriots we’re highlighting in our OTAs winners and losers piece.

The speedy undersized wide receiver could carve out a role on special teams with a solid preseason. The second-year Utah product has been the fastest player on the practice field for the Patriots, being used as a returner during OTAs. Dunn ran a 4.22-second 40-yard dash at his pro day last spring, and he had five touchdown on 48 returns during his four-year career with the Utes.

He would be a much more explosive option on kick returns than last year’s specialist, LeGarrette Blount.

Edelman’s not resting on his laurels despite signing a four-year, $17 million contract over the offseason. The sixth-year receiver has been going all out at OTAs, and he might look even better than last season. Edelman even beat Darrelle Revis for three receptions on Thursday.

The Tom Brady-Edelman connection didn’t diminish over the offseason. Brady is looking for Edelman often in practice.

The Thompkins hype started last spring when he shined during OTAs and the preseason. KT is at it again this offseason, and he appears to have bulked up to over 200 pounds.

If Thompkins has a good grasp of the playbook in 2014, he should make big strides.

Wilfork’s recovery from last year’s torn Achilles appears to be going well. He left the field on Thursday an hour into OTAs to work with the rest of the injured players in the practice bubble, but only after competing in 11-on-11 drills. It would be surprising, based on his work during OTAs, if Wilfork wasn’t ready for Week 1.

Harmon, like Thompkins, added some bulk over the offseason. The second-year defensive back has the inside track to winning the starting strong safety role, and he hasn’t done anything during OTAs to lose that.

Harmon could have a big year in his second season in the NFL while surrounded by some elite talent in the Patriots’ secondary.

Swanson has made big plays during all three OTAs open to the media this spring. He had a few pass breakups in Week 1, an interception in Week 2 and another pass breakup in Week 3. The Patriots will need a fifth cornerback while Brandon Browner serves a four-game suspension to start the season, and Swanson is in the running for that role.

Swanson’s rookie season didn’t go as planned after he suffered an injury during training camp with the Colts, then spent the 2013 season on the San Francisco 49ers’ practice squad. He’s getting a second chance with the Patriots, and he’s not letting it go to waste.

Mallett struggled in the second week of OTAs, then missed Thursday’s practice. The fourth-year backup quarterback is fighting for his spot on the team, and he’ll need to show some improvement during minicamp and training camp.

Dobson waited to have foot surgery over the offseason, and that decision could come back to bite him. If Thompkins and Josh Boyce continue to impress during minicamp, Dobson could find himself falling down the depth chart. Thompkins and Dobson traded off the starting role in 2013.

The second-year defensive tackle needs to get on the field fast if he wants to lock down a roster spot in 2014. He was present in Week 1 and absent in Weeks 2 and 3. We still don’t know what ailment kept Armstead out for the entire 2013 season, but it’s concerning to see him miss more time this spring. 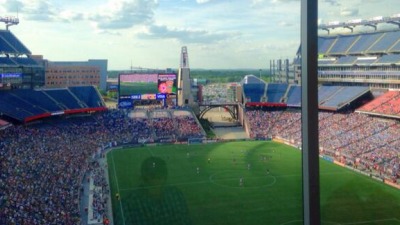 Julius Randle Works Out Separately From Other Prospects At Celtics Facility