Philadelphia Phillies outfielder Tony Gwynn Jr. was welcomed back Tuesday night with a special outpouring of love and support from the fans at Citizens Bank Park.

In Gwynn Jr.’s first at-bat since his father, Hall of Famer Tony Gwynn, died June 16, Phillies fans greeted him with a heartwarming standing ovation. Manager Ryne Sandberg sent Gwynn Jr. up to the plate to pinch hit in the eighth inning of the Phillies’ 7-4 win over the visiting Miami Marlins, and the cheers only grew louder as he stepped into the batter’s box.

“Needless to say, it was pretty awesome,” Gwynn said after the game, via MLB.com. “Made the at-bat a little more difficult, had to fight the emotion and the tears and stuff like that. But that’s why guys who play here like to play here. When things are going well or regardless of whether they’re going bad or good, I think the fans stay behind us. Much appreciated by the Gwynn family.”

Marlins catcher Jarrod Saltalamacchia recognized the special moment and walked out to the pitcher’s mound to give the emotional Gwynn Jr. some more time.

?It was really hard. Really hard,? Gwynn told MLB.com of focusing on the at-bat. ?I was fortunate to get two balls to regroup a little bit, but I?ve never been through anything like that before. Under these circumstances, it was even tougher, but like I said, it was much appreciated.” 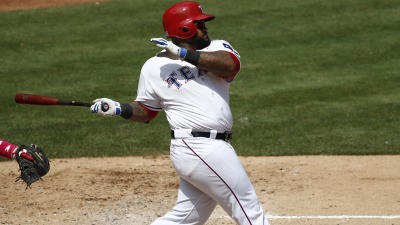