In recent years, Twitter has had an amazingly accurate way of showing us what Americans care about most, especially in the world of sports.

Every major sporting event is augmented by a barrage of tweets from across the country as journalists and fans alike react in real time.

By now, we’ve all seen John Brooks’ late-game header that gave the U.S. a dramatic 2-1 win in their first game of the 2014 World Cup, as well as the raucous celebration that followed.

Perhaps the most amazing reaction to Brooks’ heroics, though, was captured in a six-second video, via SB Nation’s Michael Katz.

As the caption shows, each dot represents a “geotagged” tweet whose topic was Monday’s USA-Ghana game (tweets about Ghana are red, while tweets about the U.S. are blue). After Brooks’ header gave the U.S. the lead, Twitter feeds in America simply blew up.

Watching Twitter volume ebb and flow during a live event is always fascinating, and the mapping website CartoDB compiled a global heat map — which can be zoomed in and out to any location — of how the entire world tweeted over the course of the game. It’s definitely worth a look. 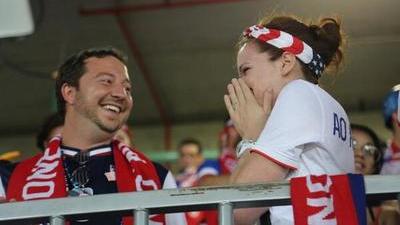